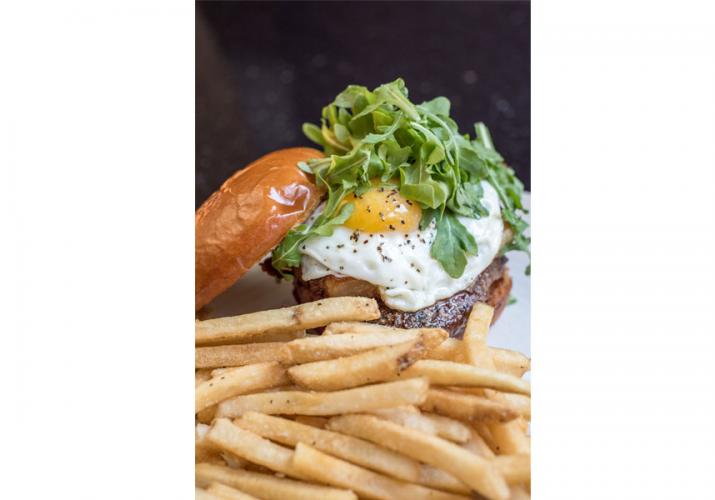 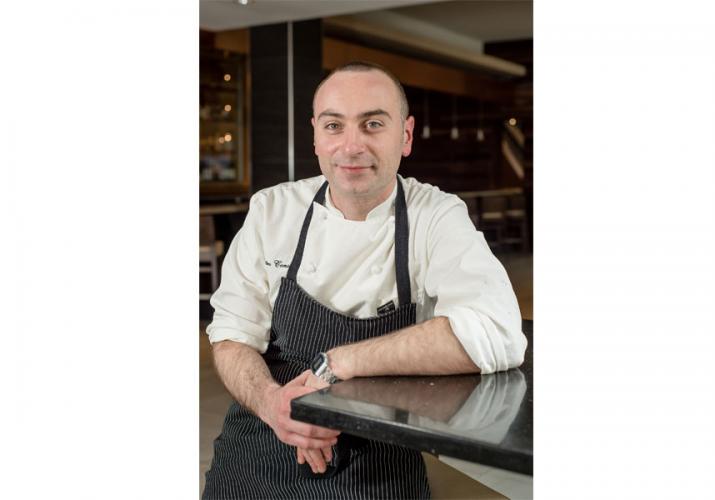 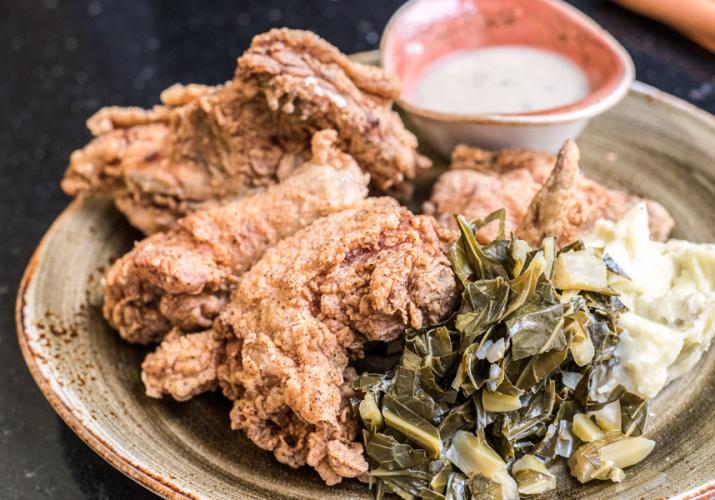 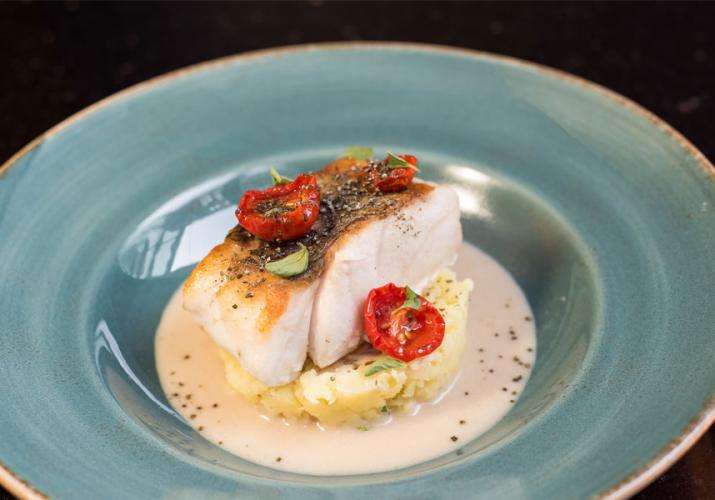 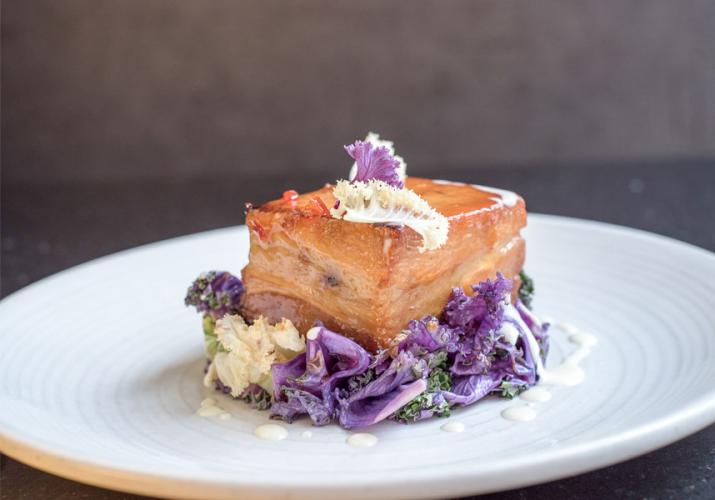 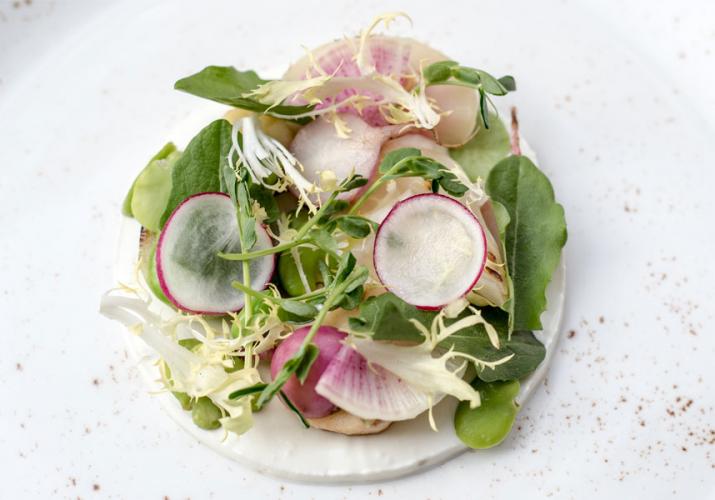 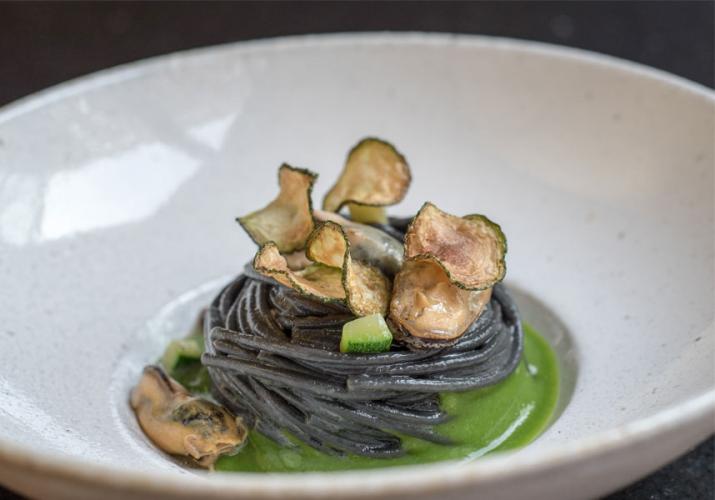 Sway’s Chef Pietro Consorti might have been a botanist. The appreciation for nature that attracted him to science found a home in his passion for cooking great food. The closer to the source, the purer the ingredients, the better food you can make. For him, this is more than a philosophy; it’s heritage.
Consorti is from Prato in Tuscany, a region of Italy rich in food traditions. He moved to Louisville only nine months ago after working as executive sous chef with Chef Andrea Aprea at Milan’s Park Hyatt’s Michelin-starred VUN restaurant. Just 34 years old, Consorti has been pursuing cooking with a passion for more than 14 years, but the traditions he espouses have been with him all his life, and in his family for generations.

The food at Sway is Southern and Consorti brings it closer to its roots using local suppliers and seeking ethically sourced ingredients.

The Southern Fried Chicken is half a natural Kentucky bird, brined for two days for flavor and tenderness. It’s then breaded and fried to perfection. The creamy, mashed new potatoes on the plate don’t need help from the robust thymy gravy, but they pair so well, you might need to close your eyes to fully appreciate them together.
He buys ground beef for the Southern Burger at local biodynamic Fox Hollow Farm. The meat has a natural tenderness and mild sweetness. On top is a thick slice of crisp, seared pork belly, a fried egg, and a healthy portion of arugula.
The top bun comes at a jaunty angle, daring you to smash its grilled toastiness onto that substantial pile of proteins without tucking your napkin into your collar. If you can wrangle it into a hand-held burger, you are a true American, but no one could fault you for resorting to a fork and knife.
For now, Italian food shows up in specials and seasonal dishes, but the chef is planning on bringing something new to Sway in the next couple months. A smaller dining area inside the restaurant at 4th and Jefferson that seats 12 will go by the name The Italian Way. He plans to open for communal, Italian-style meals serving virtual tours of Italy via a select tasting menu before Derby.
Consorti’s squid ink spaghetti (from Gragnano, Italy) with mussels in a zucchini coulis is an item that might make an appearance at The Italian Way. The umami flavor of the pasta and its firm texture are an exquisite foundation for the fresh, bold, electric-green zucchini coulis. The mussels bridge the gap between those worlds, while the garnish of carefully fried, razor-thin zucchini chips add a pop of crunch.
The communal Italian concept isn’t unheard of in Louisville. Consorti cites his colleague, Chef Gina Stipo of At The Italian Table. He stopped by there once when she was making panzanella, a summer salad that is highly traditional and impossible to fabricate without bread that is regionally specific and handmade.
The chef explains the recipe, a series of steps that must be done just-so then remembers the conversation.
“I said, ‘Where did you find the bread?’”
She said, “Try, try.”
“‘It’s perfect, no?’ That’s something really from Tuscany... She is doing a good job. But I come from a background of fine dining and experience, so what I want to try really is to blend these things together.”
The concept adds a broader range of techniques and approaches to the foundational traditions the chef depends on: a modern approach in the Italian way.

What are you reading?
I’m now studying a book about the weeds and vegetation here in Kentucky to find some wild herbs or weeds that I know with the Italian name [of] that I can find here.

Do you use them back home?
Foraging in Italy is a big thing especially in my family in Tuscany. It’s something that you have in your roots, in your culture.  Every season has different things to offer.

What would you find in the spring?
When the asparagus season starts, you go and you know that you are going to find wild catmint, wild fennel plant, small onion, or hops sprouts.

Hops sprouts?
We use them in egg frittata. They taste lake asparagus but a little bitter, so you need to add some acacia flower and there you have this sweet fresh taste.

What about the rest of the year?
You have the summer with the blackberries and the catmint is still there, and then you have mushrooms, and after that, chestnut.

Do you have plans to do that here?
Kentucky is the bluegrass state and this means that you have a lot of countryside, so  you have plenty of people that in the past used to know those things and used to know the spot where to pick morels, for example. It needs only to be rediscovered.
For me, cooking Southern food is cooking with Southern produce and ingredients, It’s not only fried chicken for me, it’s more connection to the countryside and what this state can offer.

What local cheeses are your favorites to use?
I really like the Barren County Bleu and the Smoked Kentucky Bleu of Kenny’s Farmhouse. This last one reminds me an Italian cheese that is made in the mountain area of Friuli-Venezia Giulia in Carnia.
Actually, the cheese is a smoked ricotta and they have this traditional dish using pumpkin gnocchi with butter sage and this cheese.

I know Chef Aprea was a huge influence in your life and style. What was that like?
A big part of the job was in amazing people doing what they know – so you work on the tradition. We were working together on the concentration of the taste - strong, strong, strong. It was Italian food, but very strong. You close your eyes, and boom.
We had this dish on the tasting menu: paccheri, ricotta di bufala e concentrato di ragù napoletano. Almost everybody in Italy knows the ragù napoletano. It’s a tradition. It’s something that every mother in Naples gets up and starts cooking early Sunday morning and just cooks slow all day. And what we did, we concentrated more this flavor making a bigger batch, ending up after two days and multiple steps with a kind of ketchup of ragù napoletano. It’s very strong.

It probably takes a lot to get that flavor out of a zucchini, like in the zucchini coulis.
No. It’s the opposite. It takes nothing. You use only the green part, and a little bit of what we call the bread of the zucchini. Boil, and... You don’t have to add nothing else if you have the good zucchini or the good mussels.

How do you hope to influence the future chefs working with you?
The idea is to show them – to take [them] to the farm to see farmers and growers. I want to show to my guys that there are people that really care what they are doing. They invest a lot of efforts in just doing one thing – growing rice for example or raising duck. That’s all they do. We have to know them and let people know that there is another way to eat.  They are brave. I like to have people with a passion. It’s the difference.<