SPORTS: LOVE OR HATE: THEY CAN'T SAY NO 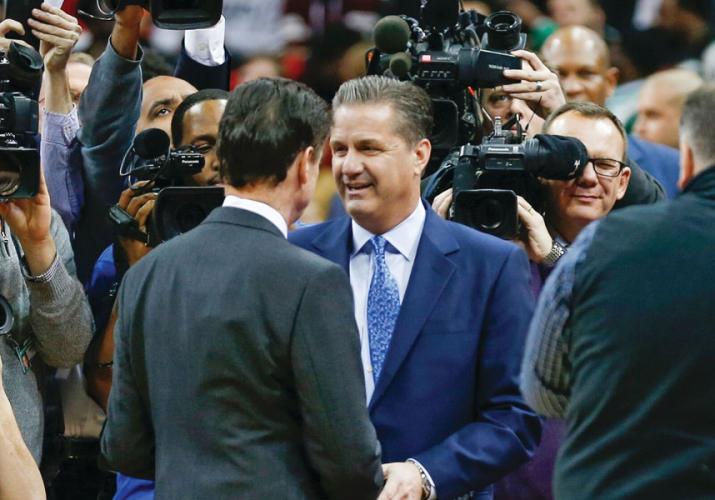 There’s been a lot of talk in these parts lately that maybe Rick Pitino and John Calipari are playing nice together.  Maybe they don’t hate each other.  Hate is such a strong word anyway, maybe we’ve overplayed all their barbs since Cal arrived in Lexington.  After all, when Pitino beat Calipari this season in their annual matchup, it was quite the mutual admiration society with each coach showering the other with compliments in the post game news conference.

So Is their rivalry cooling?  Maybe they are friends now.  Maybe they didn’t despise one another all along. Is it possible?

In a word, actually indulge me for two words: HELL NO!

Don’t, for a second, buy into the notion that anything has changed.  I posed the question of “They still hate each other right?” to several people close to the Louisville program first.

“I can’t speak for Calipari because I don’t know him a lick, but I can guarantee you Rick hates him.”, said one source.

“Of course Rick can’t stand him.  Why would that have changed?,” said another.

“Nothing has changed.  He wants to crush Rick every chance he gets.”

So why would Pitino agree to be a guest on Calipari’s podcast?  I posed that to several Louisville sources.

“He had no choice once Calipari asked him, if he declines, then Rick looks like the bad guy” said one source.

I know people hate (that word again) unnamed sources, so how about a national journalist who wrote a book with Pitino?  I had Pat Forde, of Yahoo Sports who also co-authored “Rebound Rules” with Pitino, on my radio show after word of the podcast  had gotten out.  I posed him the same question.

“To the best of my knowledge they still hate each other, trust me that (podcast) came as a surprise to me, because they have not liked each other for a long long time.  And it hasn’t been like ‘I don’t really care for him’, it’s been ‘No, I hate that guy”

So listen to the post game news conferences full of praiseful words toward both programs.  Take 45 minutes and listen to the podcast.  Maybe in the sprit of this newfound love-fest between Cal and Rick, you take that person in the next cubicle who roots for the other team out to lunch.  Buy a Red and a Blue Tie.  Tell your kids it’s OK to root for both teams.

Just don’t buy this BS that these two like each other, They don’t.  They still hate each other, and probably always will no matter how many podcasts they do.