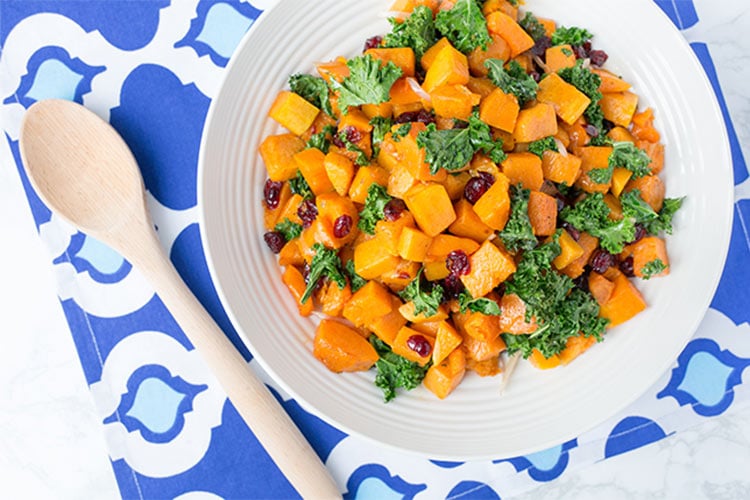 Roasted Butternut Squash with Kale
Raise your hand if you’ve ever been intimidated by kale. Well, you shouldn’t be! There are tons of ways to incorporate it into your diet other than raw in a salad… such as this sweet side dish! The brown sugar and natural sweetness of the butternut squash help to balance out the bitterness of the kale, and you’ve got an extra bonus of dried cranberries to carry the sweet note throughout the entire dish.
Prep Time: 20 minutes | Cook Time: 25-30 minutes
Ingredients:
2 tablespoons extra virgin olive oil
8 cups butternut squash, cut into 1-inch pieces
¼ teaspoon cinnamon
½ teaspoon salt
black pepper, to taste
1 shallot, thinly sliced
1 tablespoon brown sugar
4 cups kale, cut in bite-sized pieces
½ cup Reduced Sugar Craisins® Dried Cranberries
Directions
1.    Preheat the oven to 350°F and spray a baking sheet with nonstick cooking spray or line with a silicone baking mat.
2.    In a large mixing bowl, toss 1½ tablespoons of oil with the squash, cinnamon, salt and black pepper.
3.    Spread the squash in a single layer onto the prepared baking sheet and roast for 20-25 minutes, or until fork-tender but not mushy.
4.    While the squash is roasting, heat a medium skillet over medium-high heat. Add the remaining ½ tablespoon of oil and cook the shallots until soft, about 4-6 minutes.
5.    In a large mixing bowl, toss the brown sugar, kale and Craisins together.
6.    In the last 5 minutes of roasting time for the squash, spread the kale mixture on top of the squash and finish cooking until the kale shrinks and wilts.
7.    Gently toss the cooked shallots into the butternut squash and kale mixture.
8 ¾ cup servings | Nutrition Facts based on a 1 cup serving
Calories 140 | Fat 4g | Cholesterol 0mg  | Sodium 160 mg | Fiber 6g
Carbohydrates 29g  | Sugar 8g | Protein 2g  | Smart Points: 2
Twice Baked Sweet Potatoes
This is a fun alternative to a sweet potato casserole, since the contents will be served back in the potato skin. Instead of a calorie and fat-laden casserole recipe, we scooped out the centers of our sweet potatoes, added some non-fat Greek yogurt, cinnamon, brown sugar and nutmeg, mixed it all together and came up with these sweet and delicious sweet potatoes. The yogurt adds a slight tang that controls the sweetness of the brown sugar and potato.
Prep Time: 10 minutes | Cook Time: 70 minutes
Ingredients:
4 medium sweet potatoes
½ tablespoon extra virgin olive oil
½ cup plain, nonfat Greek yogurt
2 tablespoons brown sugar
1 teaspoon cinnamon
½ teaspoon nutmeg
2 tablespoons pecans, chopped
64 mini marshmallows
Directions
1.    Preheat the oven to 375° F.
2.    Wash the potatoes and dry them on a paper towel, then poke several holes in them with a fork, and brush the oil on the outsides of them.
3.    Wrap each potato in foil, and place on a baking sheet in the oven for 40-60 minutes, or until fork-tender. Decrease the oven temperature to 350° F.
4.    When the potatoes are cool enough to touch, cut them in half lengthwise, and scoop out the centers in a large mixing bowl.
5.    Add the yogurt, brown sugar, cinnamon and nutmeg to the mixing bowl with the scooped out potato centers. Mix in stand mixer, or handheld mixer until smooth.
6.    Evenly spoon the mixture back into the potato skins, and top with the pecans and 8 marshmallows per potato.
7.    Bake for 10 minutes, or until the marshmallows are toasted and melting.
8 servings | Serving size: 1 filled potato half
Calories 91 | Fat 3g | Cholesterol 1mg  | Sodium 36 mg | Fiber 1g Carbohydrates 14g  | Sugar 7g | Protein 3g  | Smart Points: 4