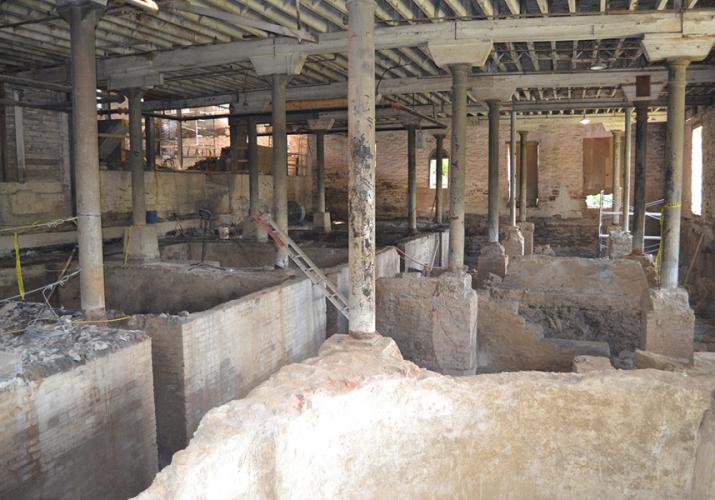 Buffalo Trace Distillery has gone back to its early distilling days, literally, with the discovery of early foundations and fermenting vats dating back to 1873. This is a unique find as intact remains of early buildings and equipment on many distilleries are completely removed during development and expansion.

The discovery happened when Buffalo Trace began renovating a very old building on property called the O.F.C. Building once used for distilling, but long since vacant. The building sits alongside the Kentucky River and was going to be turned into meeting and event space. When construction crews went in to shore up the foundation, the crew discovered there was more than met the eye.  As digging proceeded, the original 1873 distillery foundation as well as fermenters from 1882 were unearthed.  The Distillery immediately stopped work and called in two area experts, Historic Preservation Consultant/Whiskey Historian Carolyn Brooks and Bourbon Archaeologist Nicolas Laracuente.

Brooks and Laracuente confirmed what Buffalo Trace had suspected, the foundation and fermenters were from an earlier build of the Distillery and dated back to the days of Col. E. H. Taylor, Jr, in 1873. This Distillery, called the O.F.C. Distillery, was later destroyed by fire in 1882 but work began immediately to restore it.  The 1873 foundation was left in place and Taylor expanded the Distillery, installing the 11,000 gallon fermenting vats in a massive construction project that was completed in a single year. Taylor described it as “the walls of the O.F. C. fermenting room are constructed of rough ashler from limestone quarries – the floor is grouted in best English cement…. The vats… are constructed of brick, laid in English cement – the base six feet below the level of the floor, and the top eleven feet below the ceiling.  They are first lined with first quality of Portland cement, and this again lined with the best sheet copper, manufactured especially for this purpose.”  The foundation and the vats were covered with a cement floor when the building was decommissioned in 1958 and forgotten, until today.

“To have a find like this, that dates back to Taylor’s time in the 1800’s is simply amazing,” said Mark Brown, president and chief executive officer, Buffalo Trace Distillery.  “We look forward to preserving these discoveries for many more generations to enjoy.”

Bourbon Archaeologist Nick Laracuente agrees, stating “archaeological investigations at large, continuously active, distilleries like this never yield intact remains since the buildings and equipment are typically salvaged, repurposed, or torn down. We were lucky to discover it. But, what is even more impressive is that Buffalo Trace took the time and effort to completely change their project in order to preserve and interpret this unique piece of whiskey history.”

This rare and intact discovery has altered this National Historic Landmark Distillery’s plan of renovating the first floor of the building for meeting and events space; instead the new discoveries will be preserved and available for visitors on a future tour to be announced, complete with at least one restored fermenter that will be operational in the near future. The remaining upper levels of the building will continue to be renovated according to the original plan for meetings and events.