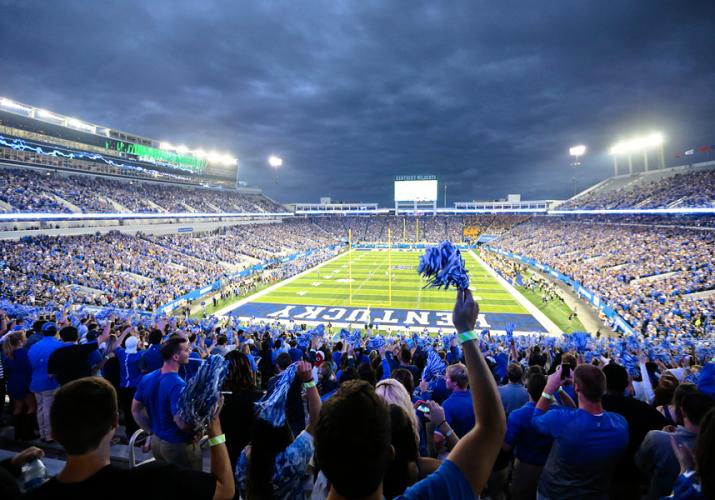 Stoops Troops Version 4.0 rolls off the assembly line in early September. After consecutive disappointing 5-7 seasons, the pressure is building for the Kentucky’s head man to lead the Wildcats into the lands of competitive SEC play and postseason play is building like a runaway locomotive. As I mentioned last month, the sense of Big Blue Nation’s restlessness is tangible. A bowl game in Siberia would be reason for champagne popping to a fan base starving for the smallest taste of success. However, most fans seem more comfortable complaining about losing their parking pass than being excited about the season. Winning results are no longer desired. They are expected.
I believe Mark Stoops feels the “heat”, so to speak, so much so that he hired a new offensive coordinator, a new quarterback coach, a new secondary coach, a new middle linebacker/special teams coach, and a new wide receivers coach. It wouldn’t shock me to see a new water boy roaming Kentucky’s sidelines, either. Stoops knows how critical this season is for the future of Kentucky football. So who will Kentucky’s M.I.P’s (Most Important Players) be?
Drew Barker: the ballyhooed redshirt sophomore is QB 1 after an impressive spring camp. Kentucky’s quarterback play the past two seasons has been spotty, and that is putting it very nicely. Simply put, I believe Barker is the most important player for Kentucky this season. In today’s fast break world of college football offenses, teams either swim or sink based on quarterback play. No one doubts he has the talent, and he has all of his weapons returning. But will his inexperience get in the way?
Kentucky’s Wide Receivers: this side of a Pentecostal tent revival, no group has ever made complete strangers stand up and shout in unison more than Kentucky’s wide receiver corps did last season. Brilliant one play, dysfunctional the next, their play was more enigmatic than a Louisville football player jamming to Mozart. Dorian Baker, Jeff Badet, Ryan Timmons, and Garrett Johnson all have the talent. None of them have shown the consistency. If both come together, Kentucky could be dangerous offensively. If they don’t, go ahead and pass me the bourbon. Now.
Boom Williams: if Boom was on another SEC team with more tradition, the country would hear his name much, much more. Boom is a threat to score every time he touches the football. He is one of the most explosive players in the conference. Staying healthy is the key.
Matt Elam: it is high time for the behemoth from E-Town to show the SEC why he was one of the country’s top high school players. We know he could shut down every Shoney’s breakfast buffet in a five state radius. We don’t know if he has the stamina to jam up the opponent’s offensive line every play. Fundamentally improved, Elam is the key to overcoming Kentucky’s defensive line losses of CJ Johnson, Farrington Hueginin, and Melvin Lewis.
Courtney Love: I am talking about the Nebraska transfer who has earned praise from Kentucky’s coaches as the defensive team leader from his middle linebacker spot. I am not talking about the crazy woman that probably killed Kurt Cobain.
Chris Westry: the SEC All-Freshman Team member returns to shut down one side of the football field. Tall, athletic, and stronger, Westry has all the makings to be the fabled “shut down corner” college teams crave and NFL teams make millionaires a million times over. Keep an eye on his counterpart Derrick Baity, as well. Both are over six feet tall and can cause nightmares to opposing wide receivers.