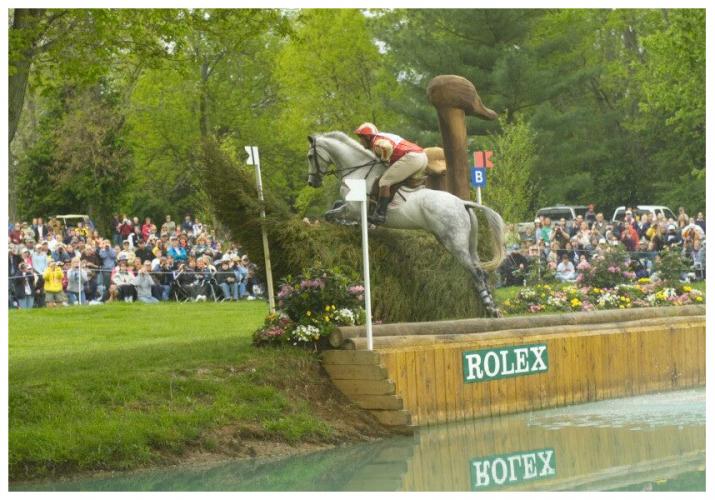 Defending champion and Olympic gold medalist Michael Jung of Germany heads an impressive list of entries for the 2016 Rolex Kentucky Three-Day Event, Presented by Land Rover. Known as the "Best Weekend All Year," the Rolex Kentucky Three-Day Event returns to the Kentucky Horse Park in Lexington, Kentucky, April 28-May 1.
The starting field features 71 riders from nine countries including Australia, Brazil, Canada, Great Britain, Germany, Ireland, Mexico, New Zealand and USA, with some riders entered with up to three horses. Joining Jung are some of eventing's most famous names including Sir Mark Todd and Blyth Tait of New Zealand and U.S. Olympic veterans Phillip Dutton, Boyd Martin, Kim Severson and Will Coleman.
At stake is $350,000 in prize money, a $50,000 increase from last year, as well as a shot at the $350,000 Rolex Grand Slam of Eventing, which is awarded to any rider who wins theRolex Kentucky, Mitsubishi Motors Badminton and Land Rover Burghley 'Four Star' Events in succession. As winner of last fall's event at Burghley, Jung is looking to add the second leg of the Rolex Grand Slam (Rolex Kentucky) to put him in position to becoming only the second rider (along with Pippa Funnell of Great Britain in 2003) to win the Grand Slam, when he rides at Badminton the week after Rolex Kentucky.
This year's Rolex Kentucky Three-Day Event has added importance as it is also a qualifying competition for riders seeking to be part of the Land Rover U.S. Eventing Team for the 2016 Olympic Games in Rio de Janeiro this summer.
Defending Rolex Kentucky champion Jung is entered on Fischerrocana FST, the horse he rode to victory last year. Last year the duo completed on their dressage score of 39.3 penalty points to claim the $100,000 winning purse along with the Rolex timepiece that goes to the winning rider. Jung, the world's leading event rider, also took third place aboard his Olympic mount La Biosthetique Sam FBW. He is the first event rider ever to hold the Olympic, World and European titles simultaneously, winning the Individual gold medal at the 2010 Alltech FEI World Equestrian Games™ (WEG) and double gold medals at the 2012 London Olympic Games along with three consecutive European Championships.
New Zealand will be represented by a particularly strong line-up of riders, including two of the sport's all-time legends. Two-time Olympic gold medalist and six-time Olympian Sir Mark Todd  will be competing NZB Campino, the horse he rode at the 2012 Olympic Games in London where they won a Team bronze medal. Voted the "Equestrian of the Century" by the International Equestrian Federation (FEI) in 2000, Todd has won almost every Four Star three-day event in the world, although thus far the Rolex Kentucky title has eluded him despite his attempts in 2014 and 2011. Blyth Tait, a four-time Olympian who won the individual Gold Medal in 1996, is a former World Champion and was the Rolex Kentucky Champion in 2000. He will be riding Xanthus III.
Among those entered to compete in this year's Rolex Kentucky Three-Day Event are: