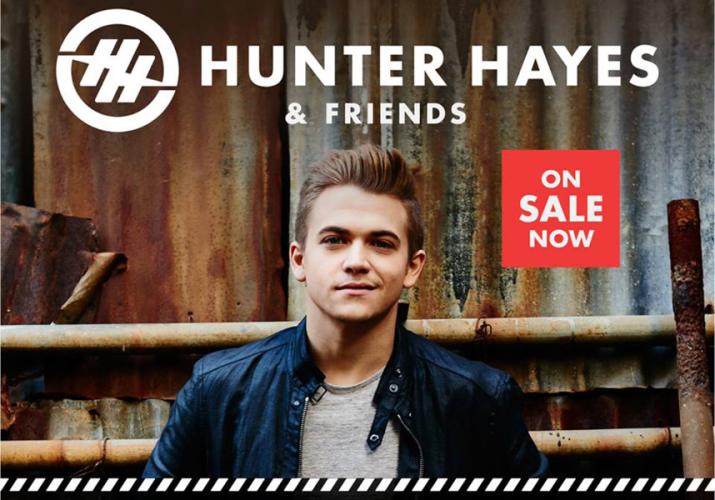 The Rolex Kentucky Three-Day Event, Presented by Land Rover will feature a special concert- Hunter Hayes & Friends - followingSaturday's Cross-Country. Known as the "Best Weekend All Year," Rolex Kentucky takes place April 28 - May 1 at the Kentucky Horse Park.
Hayes, a 5-time GRAMMY nominee whose hits include his most recent single "21" and the No. 1 smashes "Wanted," "Somebody's Heartbreak" and "I Want Crazy," will perform at the Alltech Arena at the Kentucky Horse Park in Lexington after the completion of the Cross-Country phase on Saturday, April 30.  Doors will open at 4:30 p.m. and the first act will go on at 6:00 p.m. (EDT). To purchase tickets to the concert, please visit the official Hunter Hayes website atwww.hunterhayes.com, click on the "Tour" section and select the April 30, 2016, concert date.
A portion of the proceeds from ticket sales will benefit the official charity of the 2016 Rolex Kentucky Three-Day Event, the Thoroughbred Aftercare Alliance (TAA). The TAA is a Lexington-based, non-profit organization that accredits, inspects and awards grants to approved aftercare organizations to retire, retrain and rehome Thoroughbreds. Ticket proceeds will also benefit The USO, which is a nonprofit organization that provides programs, services and live entertainment to United States troops and their families, and the United States Equestrian Team Foundation in support of the U.S. teams competing in the 2016 Olympic Games in Rio de Janeiro.
"Having Hunter Hayes perform during the 2016 Rolex Kentucky Three-Day Event adds a new element to the excitement of our event and supports not only the U.S. Eventing team, but all U.S. equestrian teams in their preparation for the 2016 Olympic Games in Rio de Janeiro," said Stewart Perry, President of Equestrian Events, Inc. (EEI), organizer of the Rolex Kentucky Three-Day Event.
The Rolex Kentucky Three-Day Event is the nation's premier Three-Day Event and one of the most prestigious equestrian competitions in the world.  The Fédération Equestre Internationale (International Equestrian Federation - FEI), the world's governing body of equestrian sports, has designated the Rolex Kentucky Three-Day Event as a 'Four Star' Eventing competition, the sport's highest designation, which is given only to the Olympic Games, World Championships, and six annual events around the world. "Rolex Kentucky" is the only Four-Star event in the Western Hemisphere.
Ticket sales to 2016 Rolex Kentucky are available at www.RK3DE.org, with options that include four-day, three-day (Fri-Sat-Sun) and single-day general admissions, group sales and tailgating. All grounds admission tickets include parking, admission to the Kentucky Horse Park and International Trade Fair.Tickets for the Hunter Hayes and Friends concert taking place on Saturday, April 30 beginning at 6 PM at the Alltech Arena may be purchased on Hunter Hayes' website www.hunterhayes.com.  Please go to the website and click on "Tour" at the top of the landing page, then click on the link to purchase tickets for the April 30, 2016 concert.
TICKET TYPES AVAILABLE: $35 General Admission & $150 Taylor Harris Insurance Services VIP Access Package which includes: VIP Pit Pass (front of stage with full cash bar), VIP Lounge with full cash bar and food, invitation to the VIP After-Party and memorabilia signed by Hunter Hayes."
Equestrian Events, Inc. is a non-profit charitable Kentucky corporation that was established initially to produce the 1978 World Three-Day Event Championships at the Kentucky Horse Park. Following the success of those championships, EEI established an annual event that evolved into the Rolex Kentucky Three-Day Event Presented by Land Rover.
For more information, or to purchase tickets to the 2016 Rolex Kentucky Three-Day Event Presented by Land Rover, please visit the Rolex Kentucky website at www.RK3DE.org.
Posted on 2016-02-01 by