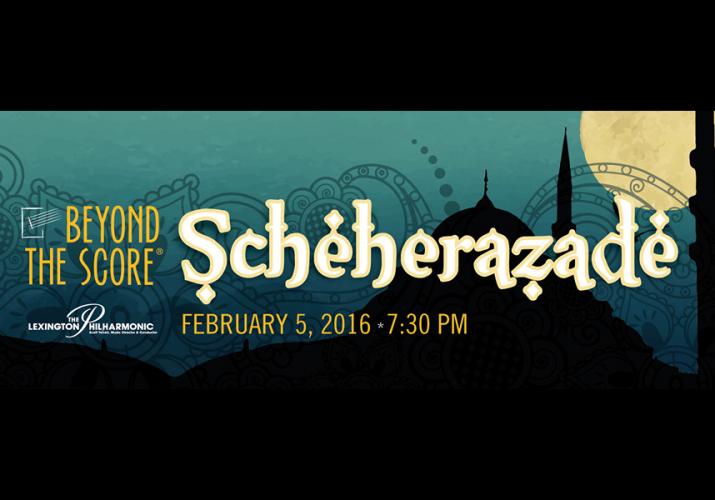 Multimedia shares the stage on Friday, February 5, 2016 during LexPhil’s presentation of Beyond the Score ®: Scheherazade at 7:30 pm at the Singletary Center for the Arts. For newcomers to classical music and longtime aficionados alike, the highly acclaimed Beyond the Score ® series from the Chicago Symphony Orchestra opens the door to the creation process of symphonic repertoire and encourages a deeper interaction with the music.
Each of the Beyond the Score ® programs provides a dramatic exploration of a composer’s music. The first half of the program merges excerpts from the score, narration by local actors, and projected images to dive deep into the origins of Rimsky-Korsakov’s timeless work. Following intermission, LexPhil will perform Scheherazade in its entirety.
“Beyond the Score ® is a truly unique concert experience,” says Music Director & Conductor, Scott Terrell. “Through the music, images, and live narration, everyone will be immersed in the dazzling world of Rimsky-Korsakov’s inspirations. It’s rare to have the opportunity to explore the genesis of a beloved masterpiece collectively, with your audience, and then play that work immediately while the shared knowledge is fresh. This will present an expanded understanding of Scheherazade and I know everyone will leave the concert inspired.”
Local Lexington actors Carmen Geraci and Margo Buchanan will narrate the roles of Nikolai Rimsky-Korsakov and the story-teller, Scheherazade, respectively. Carmen Geraci has worked as an actor, writer, producer, and director, beginning as a radio announcer for classical and commercial radio stations. He has performed locally and internationally for many theatre and film companies, most recently in the role of Dr. Einstein in Woodford Theatre’s October 2015 production of Arsenic and Old Lace. He holds degrees in music, English, and education and teaches at Lexington Catholic High School. He has appeared in numerous theatre productions in Central Kentucky,
Actress Margo Buchanan has enjoyed a career in film, theatre, music theatre, TV, and radio. She is best known for Miracle on 34th Street (1994) and as narrator in the documentary...Damn Bad Oyster: The Times of William Goebel, Governor (2009). She was awarded the 1984 Joseph Jefferson Award Citation for Actress in a Principal Role in a Play for The Rainmaker with the Pegasus Players in Chicago, Illinois.
Tickets to Beyond the Score ®: Scheherazade range from $25-$75 with $11 student tickets as available. For more information or to purchase tickets to the concert, please contact the Lexington Philharmonic Box Office at (859) 233-4226, or visit the website at www.lexphil.org.
Beyond the Score ®: Scheherazade is made possible with support from Bingham Greenebaum Doll, LLP, Ovation Partner.
Valet parking is available for $10 per car at the Rose Street entrance to the Singletary Center. Capacity for valet parking has been increased. Free parking is available in most E Parking Lots on the UK campus, as well as Parking Structure 5 located at 409 S. Limestone, with entrances on S. Limestone and S. Upper Street.

From the Chicago Symphony Orchestra:
The 2015-16 season marks the 11th year of the Chicago Symphony Orchestra’s production of the critically acclaimed Beyond the Score ® with over 25 titles produced. Under creative director Gerard McBurney’s leadership, each presentation weaves together theater, music and design to draw audiences into the concert hall and into a work’s spirit.
Initially conceived in 2005 by Martha Gilmer, Beyond the Score ® has become one of the most successful and original audience development tools in the field of classical music. At its core is the live format of musical extracts, spoken clarification, theatrical narrative, and hand-paced projections on large central surfaces, performed in close synchrony. After each program, audiences return from intermission to experience the resulting work performed in a regular concert setting, equipped with a new understanding of its style and genesis.
Beyond the Score ® was quickly recognized by orchestras in the United States and abroad; and its expanded licensing program has since brought performances to live audiences throughout the United States and the world. In addition, selected performances are also available for online viewing at www.beyondthescore.org.

The Lexington Philharmonic, founded in 1961, is the only professional orchestral organization in central Kentucky. Last year, LexPhil presented over 200 concerts and educational programs, including its Season Series, Holiday Concerts, Peanut Butter & Jelly Series for young children, Music Builds STEAM education programs, community programs and outdoor summer concerts. More information and tickets can be found at www.lexphil.org.
Scott Terrell is enjoying his seventh season as LexPhil's Music Director and Conductor. Since joining LexPhil in April 2009, he has led the orchestra in a significant transformation to demonstrate the organization’s core values of artistic excellence, collaboration, innovation and accessibility.  Scott is passionate about engaging the broadest possible community in music as listeners, musicians, composers and advocates.  His programming has expanded the orchestra’s repertoire and enhanced the national reputation of the organization through new music, multi-media and interdisciplinary projects. Through LexPhil collaborations with high schools, colleges and youth performing arts groups, Scott dedicates a tremendous amount of time and energy to educating emerging musical artists.