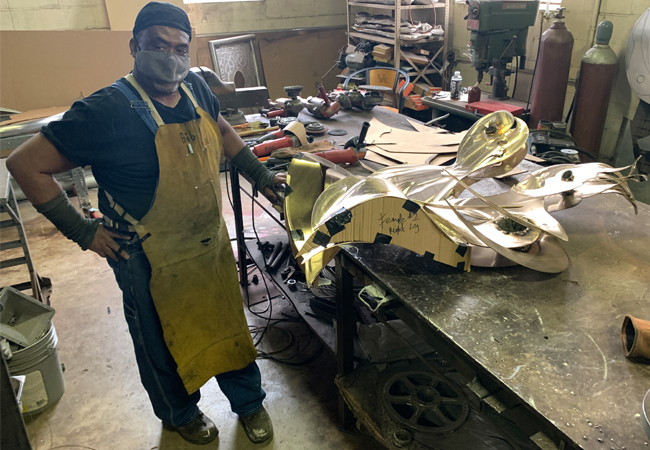 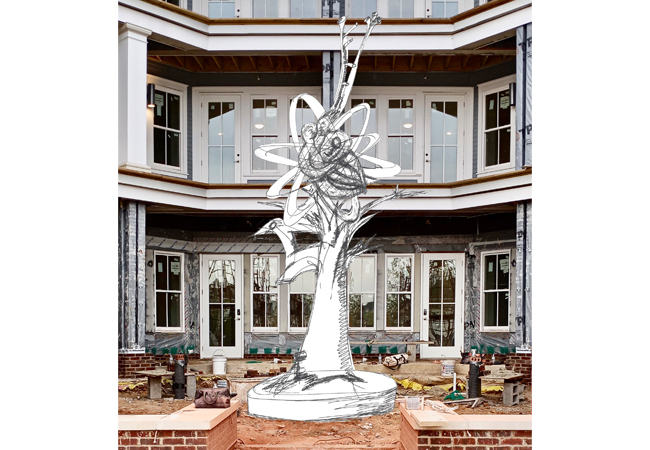 In the Peppermint Street courtyard of the brand-new Lyric Norton Commons apartment complex, a large-scale outdoor sculpture will be greeting new residents and visitors to welcome them home and enjoy being in this space. Standing 22 feet tall by 6 to 8 feet wide, the sculpture is titled “Commons Love Tree.”

They are “two lovers rotating in an orbital sphere, giving the impression they’re spinning around in the universe,” Garry says.

Trees are a subject he has become enamored with lately because they emulate the life of humans. “No two trees look alike. They’re very individualistic,” he says. “Some have limbs and some don’t; some are big, some are small; some grow sideways.”

Norton Commons itself is built to encourage walkability and interactions among neighbors, and the development company itself commissioned two public art sculptures. Dr. Garry Bibbs and Dave Caudill were selected through a months-long process facilitated by Fleur de Lis Communications.

“Public art allows you a greater experience because you get a chance to experience something intentional,” says Garry. “You can walk around it, through it, walk up to it. Sculpture has always been a much greater experience as an art form. You’re actually in the space instead of talking about the space.”

Born in Athens, Alabama, Garry was raised in Louisville and went to Seneca High School. He has a Bachelor of Science degree in arts studio, with honors, from Kentucky State University, a Master of Fine Arts degree from the University of Kentucky, and a post-doctoral study at the Art Institute in Chicago where he was an assistant to renowned artist Richard Hunt. Garry has taught and created art at UK since 1990 and is at the UK College of Fine Arts, School of Arts and Visual Studies, where he heads up the sculpture area.

Garry’s public art commissions include sculptures in Louisville at the headquarters of the Louisville Fire Department on West Jefferson (“Fire Fighters Flame Memorial”) and at the Kentucky Center for African American Heritage (“Boogie Chillin”), as well as the Kentucky Transportation Cabinet building in Frankfort and several pieces at UK, plus public art pieces at locations in Indianapolis, Chattanooga and Champaign, Illinois, to name a few.

No stranger to working with large-scale sculptures and vertical pieces, Garry has an 80-foot-long suspended installation in the atrium of the UK Gatton College of Business. For the “Commons Love Tree” at Lyric Norton Commons, he knew a vertical sculpture was in order because it will be surrounded by four-story buildings. “It’s not that big in width,” Garry says. “There’s a little bit of weight to it, but it has more height than anything else.”

For Dr. Garry Bibbs, the importance of public art is to give us a greater sense of humanity as we experience technical and architectural growth. “When one sees something, it shouldn’t always have to have this general purpose or function,” he says. “It can just be something to remind us that we’re human beings and we have appreciation for beauty.”