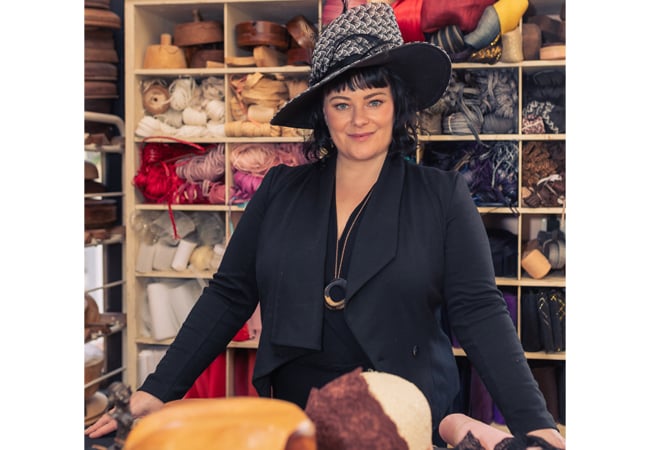 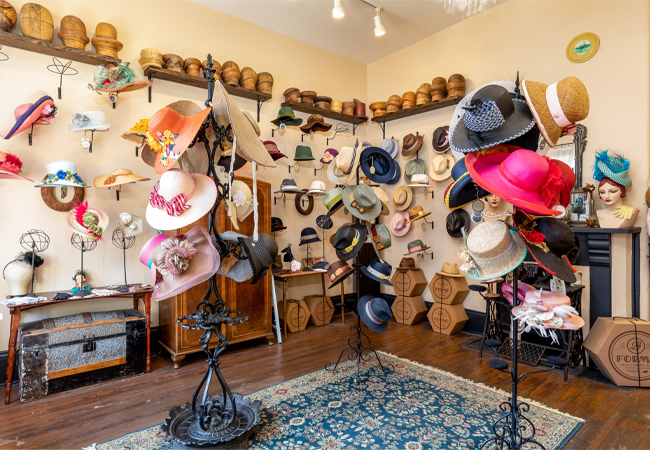 From a cottage industry in her Chicago basement to two thriving storefronts in Louisville and LaGrange, Kentucky, Master Milliner, and Formé Millinery Owner Jenny Pfanenstiel has developed an international reputation in hat design and creation. She was honored as Featured Milliner of Kentucky Derby 146 and 147, and for the last four years, Official Milliner of the Kentucky Derby Museum. Originally from Kokomo, Indiana, Jenny grew up in a family that sewed, including her mother, aunt, and grand- mother. At the age of five, she took up cross-stitch and small sewing projects. Her other passion was ballet, which eventually led to an interest in designing ballet and theater costumes. Jenny received a design degree from the Art Institute of Colorado. She relocated to Chicago, made costumes for Cirque du Soleil, theater productions, and feature films, and designed a Grammy Awards dress for comedian Margaret Cho.

One day, Jenny attended a hatmaking presentation by English milliner Patricia Underwood that would alter the course of her design career. Jenny pursued an apprenticeship in Australia and “fell in love with the craft.” She returned to Chicago, made hats in her basement, and held trunk shows in her living room. After a chance meeting with a Louisvillian at Chicago’s Merchandise Mart, Jenny packed up every spring for six years, spending two months in Louisville selling custom hats out of her hotel room and in local boutiques. She moved to Louisville seven years ago and rented a tiny space at Mellwood Arts Center. After five years of building her business through progressively larger studios there, Jenny opened Formé Millinery in a lovely green cottage at 1009 E. Main Street.

Using a traditional millinery technique called “blocking,” Jenny sculpts straw and wool over wooden hat forms, some more than 100 years old. She considers herself an old soul and often thinks about the people who have made and worn hats from those molds. “I like to think their energy comes through in the making of each hat.” When customers come into the shop, Jenny hopes they “feel that they’ve come into a different decade” and “feel a part of the process.” Customers can select materials and trims (including some from the 1920s and 30s in Paris!) for custom creations or choose a ready-made hat. Jenny also uses a rare, refurbished braid machine to create her sculptural pieces. “I let the material become what it wants to become.”

Jenny sees hats as “the cherry on top of a complete outfit” and reminds us they are not just for Derby season but make great statement pieces for other occasions as well. She immediately knows what styles will look best on brand new customers based on their physique, hair length, and height. Although “pink and red are always popular for Derby,” this year’s trend is toward “more muted, natural colors like creams, tans, rusts, and oranges. Many customers are now seeking simplicity in texture and design versus frill.”

As older parents, Jenny and her husband wanted to spend as much time as possible with their daughter Amelia. With a “manny” to help watch her, Jenny brought the baby to work. “Once she was more mobile, be- ing around all the pins and needles was not a good idea. At Derby time, I didn’t come home for dinner and couldn’t put her to bed at night.” So Jenny has since added staff to help. Now 51⁄2 years old, “Amelia loves coming to the hat shop. She plays with feathers and tries on hats.” Sometimes Amelia visits her parents’ latest venture, Judith M Millinery Supply House at 115 E. Main Street in La Grange (judithm.com), one of only three such supply houses left in the United States. The supply business includes a retail store and hat-making workshops.

Jenny offers “a unique Kentucky experience for groups” with hat-making demonstrations at Formé Millinery, as well as hat shop tours. Visit formemillinery. com for more information and follow @forme_millinery on Instagram and @formemillinery on Facebook.