EXPLORING THE HISTORY OF BLACK AND WOMEN JOCKEYS 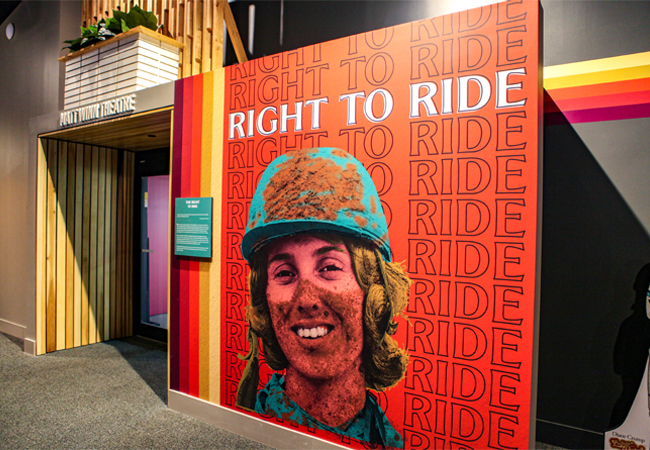 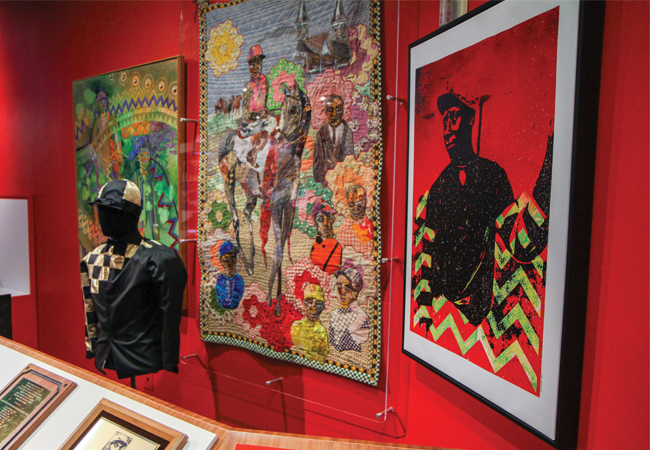 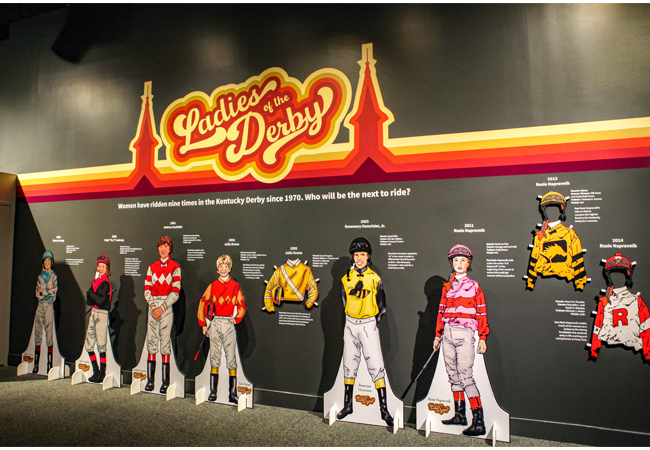 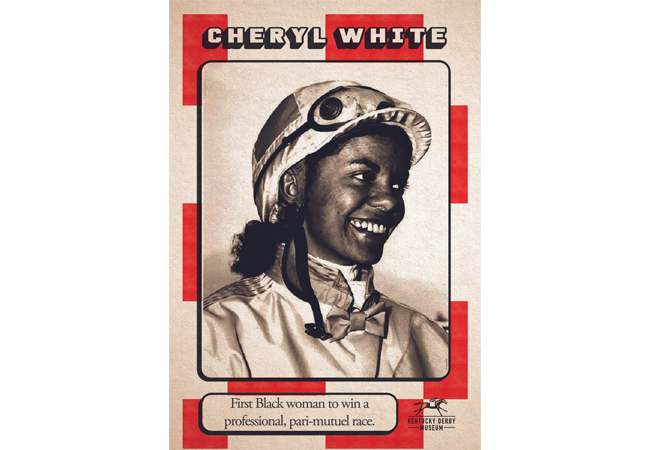 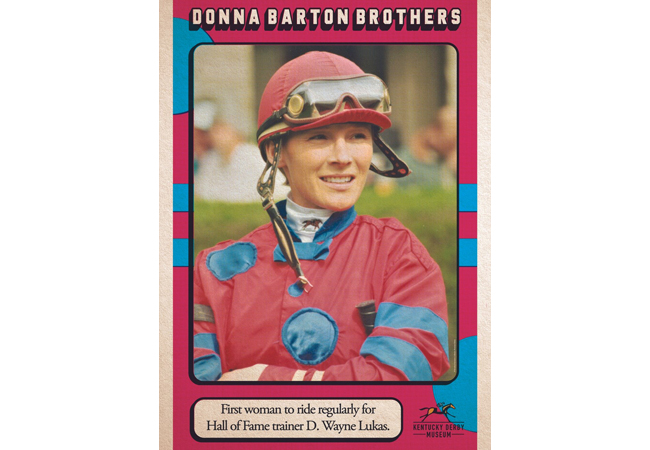 The Kentucky Derby Museum has expanded their Black Heritage in Racing exhibit and is proud to offer a new exhibit, Right to Ride, featuring the history of female jockeys.

A border state during the Civil War, Kentucky has a complicated history around the time of the first running of the Kentucky Derby in 1875. Approximately 22% of Kentucky’s 160,000 Civil War soldiers fought for the Confederacy, and 78% supported the Union. Roughly one in five of those Union soldiers were free and enslaved Black Kentuckians. All but two of the fifteen riders in the first Kentucky Derby were Black, including Fayette County’s Oliver Lewis aboard the winner Aristides. Although Lewis was born free, many of his fellow Black riders were former slaves who spent their childhoods cleaning stables and feeding, grooming, and training their slave masters’ horses on Southern plantations. Black jockeys would go on to win more than half of the subsequent 27 Derby runnings.

To feature more prominently the stories of Black jockeys in the early years of the Kentucky Derby and the influence of Black Americans in the sport since, the Kentucky Derby Museum revealed their expanded, permanent Black Heritage in Racing Exhibit to the public on March 29, 2021. Housed on the museum’s second floor since 1993, the exhibit is now twenty times larger with pride of place on the first floor. “We have more room to display artifacts and explore the stories of these incredible Black horsemen,” says Kentucky Derby Museum Director of Communications Rachel Collier. “While the exhibit has always been important, it is getting a fresh new look with space to dive into more details and more history.”

The exhibit is part of the museum’s Black Heritage in Racing Collection, which includes:

»  Black Heritage in Racing Traveling Exhibit - an educational program for churches, conventions, schools, and other museums

»  “Proud of My Calling” - an immersive, live-action theatrical experience

The Proud of My Calling Experience brings to life Rachel’s favorite story of three-time Derby-winning jockey Isaac Murphy, among others. “Isaac Murphy was one of the greatest jockeys of all time,” according to Rachel, “winning about 44% of his races.” Born Isaac Burns in 1861 to a free Black bricklayer and a laundrywoman in Frankfort, Kentucky, Isaac assumed his mother’s maiden name after his father’s death in a Confederate POW camp. Black horse trainer Eli Jordan discovered Isaac Murphy at the Lexington racing stable, where he often accompanied his mother to work. Isaac ran his first race at the age of 14, the same year of the first Kentucky Derby, and his three Kentucky Derby wins were with Buchanan (1884), Riley (1890), and Kingman (1891). Murphy rode in the Derby eleven times and was the first jockey inducted into the National Museum of Racing and Hall of Fame in 1955.

Isaac Burns Murphy died of pneumonia at 34. The New York Times covered his elaborate funeral, followed by burial in an unmarked grave at African Cemetery No. 2 in Lexington. Murphy’s remains were moved to the Man O’ War gravesite in 1967. “He is now buried in a place of prominence in Kentucky Horse Park.”

Rachel hopes museum visitors learn something new from the exhibit and “can’t stop talking about it” when they leave. More recent successes by Black Americans in racing have risen to the level of thoroughbred horse-owning. Stanley Burrell (aka MC Hammer) owned 1992 third-place Derby finisher Dance Floor. Ray Daniels and Greg Harbut are part-owners of the 2020 Derby hopeful Necker Island. Rachel believes modern racing fans appreciate “knowing where it all started.”

2020 was the 50th anniversary of Diane Crump’s historic ride in the Kentucky Derby. On May 2, 1970, she became the first woman with a mount for the most exciting two minutes in sports. The longshot Fathom came in 15th place in a field of 17, but for young girls watching from all around the world, Diane’s appearance in the highest-profile race was an inspiration. Now 72 and running an equine sales business in Virginia, Diane’s influence is still felt in the Kentucky Derby Museum’s Right to Ride exhibit running through late August 2021.

“Women can do anything!” says the Museum’s Director of Communications, Rachel Collier. “Female trailblazers set the path for modern female jockeys.” Rachel goes on to describe the discrimination and misogyny women jockeys have been subjected to since. They were often told they should “get back in the kitchen” and called “jockettes” rather than “jockeys,” with the implication that women were somehow incomplete as athletes. The exhibit’s retro 60s and 70s vibe includes a then-fashionable avocado-colored kitchenette, its playful symbolism reclaiming the space and filling it with profiles of “grit and grace.” Rachel says the response has been enthusiastic. “People love it! The retro vibe takes them back in time to that era. Old TVs play video interviews with female jockeys to deliver the stories in their own words.” In many cases, their determination was not to make history; they just wanted to ride.

Other features of the Right to Ride exhibit include:

»  “Treasures from the personal collections of Derby-riding women, including Patti “P.J.” Cooksey’s gear from the 1984 Kentucky Derby and Rosie Napravnik’s 2012 and 2014 winning Kentucky Oaks trophies”

Patti Barton is one of Rachel’s favorite figures from the Right to Ride exhibit. Her daughter Donna Barton Brothers retired from racing in 1998 with 1130 wins and covers horse racing and other equestrian events for NBC, including interviews on horseback with winning Triple Crown and Breeders’ Cup jockeys. Patti married and divorced four husbands, and all three of her children (two daughters and a son) became jockeys. “She was feisty, let me tell you!” says Rachel. Patti was prone to physical fights with other jockeys. “She got into a fistfight with a male jockey. The insult she hurled at him after the fight is hilarious but not appropriate for me to say here. Although, you can hear about it in the exhibit.”

As entertaining as the exhibit is, the inspirational message is profound. Rachel imagines a young girl walking through, “She will realize that she can follow her dreams and do whatever she wants. She will see life-size replicas of every female who rode in the Derby. They appear as paper dolls, the visual irony being that they were not dolls. They came to life.”