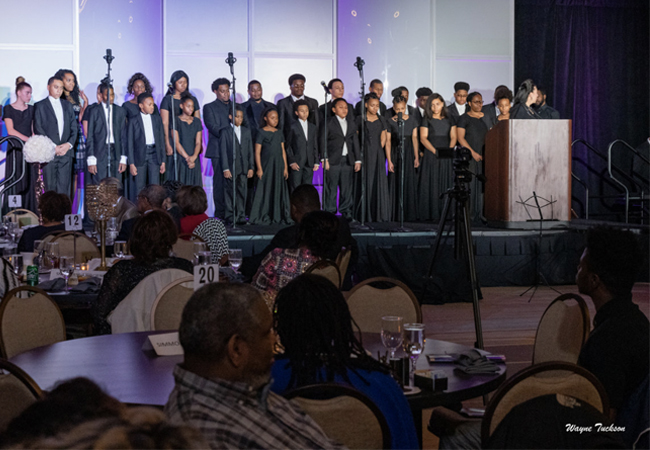 Oh, the sweet sound of children singing. Those soprano voices singing in unison produce goosebumps on those who hear it. Add in some harmonies, and this art form becomes transcendent for all who listen.

For three decades and counting, the West Louisville Performing Arts Academy has been providing these sensational sensory experiences for students and audiences alike. The young people who participate in the West Louisville Performing Arts Academy are 8 to 18. They are learning and then performing music from different genres, including spirituals, classics, pop standards, ballads, and jazz, with the organization’s mission to “positively impact and transform the lives of children and their families through the discipline of music.”

WLPAA’s founder and executive director is McDaniel Bluitt. He graduated from the University of Louisville School of Music, where he played trumpet and took all kinds of music classes, including choral training. He used his music degree professionally by becoming a music teacher with Jefferson County Public Schools. One day he saw a little Black boy seated at his desk in the hallway, straining to look inside the classroom. The child had been ousted from the room (for talking too much? McDaniel never found out why). “His predicament saddened me and pricked my heart,” McDaniel says. If only that child could be empowered instead of excluded, participating in disciplined creativity. “At that moment, the thought came to me to start a boy's choir.”

Inspired by the work of the world-renowned organized Boys Choir of Harlem, in 1988 McDaniel did just that, forming the Moore Temple Boys Choir for boys ages 8 to 18. By 1990 the project had become a 501(c)(3) non-profit organization with a new name, the West Louisville Boys Choir. McDaniel explains that it became “a home, a place for the disenchanted and broken.”

In 2002 McDaniel and those who were supporting his work with the boy's choir added the West Louisville Girls Choir. In January 2004 the two choirs officially began operating under the name West Louisville Performing Arts Academy. Now a community choir for every girl and boy of any color or creed, the organization currently operates out of offices at ArtSpace on West Broadway.

Fostering an environment for artistic, academic, and social development, West Louisville Performing Arts Academy works with these young people throughout the year by way of three major programs: the After School Tutorial Program in partnership with the University of Louisville, the Summer Music Institute, and the Annual Hope Awards Christmas Concert.

West Louisville Performing Arts Academy uses the medium of music and performing arts to educate and empower children and youth throughout the Metro Louisville area because music provides myriad layers that parallel an empowered life: precision and discipline, history and technique, nuance and expression, cooperation and collaboration.

To set up the organization itself for another 30 years of service and impact, WLPAA is reaching out to community partners and individuals with a grassroots “50 Million Pennies” funding campaign. Its official title is the 50 Million Pennies Sustained Giving Founders Seed Fund.

“We are looking for 5,000 partners who will contribute a minimum of 900 pennies per month, or an average of $9 per month, for 12 months,” says Garry M. Spotts. A consultant by trade, Garry is the coordinator of the new Founders Seed Fund.

Any community member or organization who contributes a gift of $100 will become Seed Fund Founders and can become Supporting Founders by giving a gift of $100 and soliciting 9 other people to follow suit, for a total impact of $1,000.

“Our success is the community’s success,” Garry says. “We look forward to partners across the region to join us and become ambassadors for the youth and the academy as we grow together for the future.”