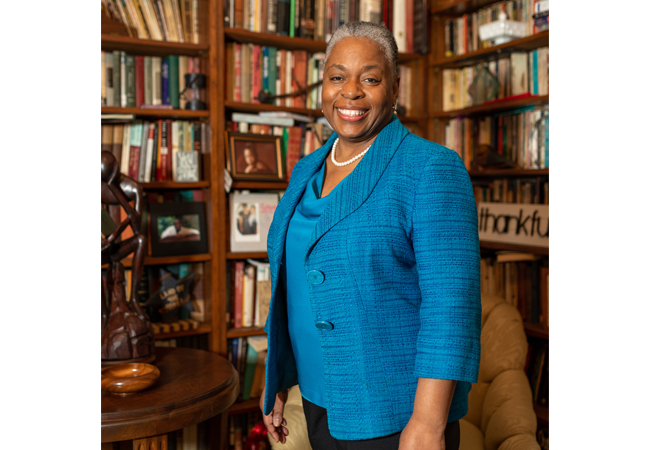 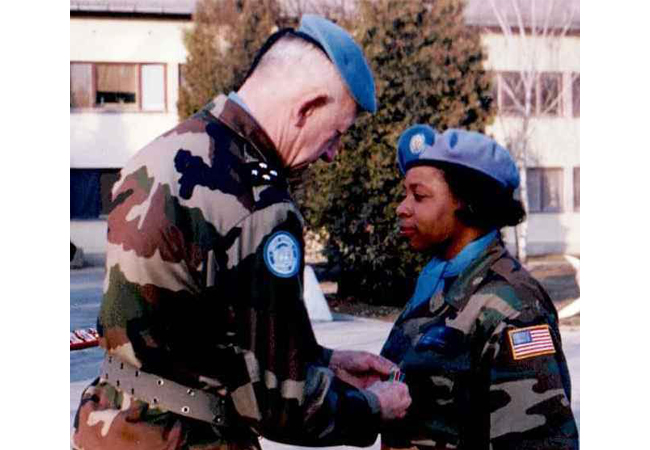 Kentucky State Representative Colonel Pamela Stevenson represents Charles Booker’s former District 43 in Louisville, which runs from the Shawnee neighborhood through downtown and east to Mockingbird Valley and Indian Hills. As a retired Air Force Colonel, Representative Stevenson has plenty of experience bringing together, understanding, and being understood by diverse people.

Representative Stevenson was born and raised in West Louisville’s Shawnee neighborhood. It was there and in the Russell neighborhood that her maternal grandparents raised fifteen children, aka “The French 15.” Her grandfather was a preacher, cleaned up construction sites, and fished, and her grandmother grew a garden to take care of their children. Representative Stevenson watched her parents, Deacon Kenneth and Sister Dorothy Stevenson, take care of the neighborhood and provide for less fortunate families. They always said, “You must leave things better than you found them.”

With her grandmother’s life insurance policy and an ROTC scholarship, Representative Stevenson studied Finance at Indiana University and attended IU’s Maurer School of Law. After law school, she passed the bar exam and was commissioned in the United States Air Force, serving 27 years as an officer, commander, and Judge Advocate General attorney.

Serving in eleven countries led to some profound and inspiring moments as well. “In the Middle East, I had to find ways to bridge the gap.” Representative Stevenson recalls meeting with some Kuwaiti army leaders and wondering what they could possibly have in common. When they saw her, the first thing they asked her was if she knew Flip Wilson, and they shouted, “Here comes the judge! Here comes the judge!” Instead of feeling understandably offended, she used this as a point of personal connection. “When people are laughing, it’s hard to fuss.”

In Mali, Africa, an official asked if he could get a picture with Colonel Stevenson. He wanted his twelve-year-old daughter to see a Black woman in uniform to show that “anything is possible.” As she traveled, when people found out Representative Stevenson was from Kentucky, they would sometimes tell her she didn’t “look like a hillbilly” or ask, “They have Blacks in Kentucky?” Again, rather than being taken aback, Representative Stevenson used these opportunities to share Kentucky’s “generosity of spirit.” “I wanted to do for Kentucky, what I did for America.”

Through EMERGE Kentucky, Representative Stevenson decided to run for office to help “transform the perception of Kentucky and move it from the near bottom of the lists that rank the 50 states.” In the Kentucky State House of Representatives, she serves on the Veterans’ Affairs, Judiciary, Natural Resources and Energy, and State Government committees. She also works with other agencies on the security of the state capitol. Her legislative priorities include social justice, ending homelessness, and making Kentucky the first state to empower its residents by offering free internet access. “If we can put a man on the moon, we can figure out how to get people off the streets. We need to coalesce our thinking to create a process all organizations can participate in. We need to stop the killing in the streets, put food in stomachs, and offer viable education and work opportunities.”

Representative Stevenson encourages women to “own their power and follow their passions. If they can run a household and run things behind the scenes, they can use their talents in the foreground.” She relies on the support of her husband of 39 years, Thomas F. Shannon, and her grown children Tamay and Thomas.

But how can her constituents, and Louisvillians in general, support her work in the legislature? Representative Stevenson has three suggestions:

​Be A Connector, A Bridge Between Ideas And People.

“In 2021, we need to move from ‘us’ and ‘them’ to ‘we.’ We need to agree on what we agree on and take a measured approach versus a political approach to the rest. When ‘We the People’ do what we are charged with, democracy works. What can we do together? Everything! We can achieve the promise of America. We can start by feeding the child next door. Every voice heard. Every Life empowered. Together we can build a Kentucky where all families thrive. And above all, let’s enjoy our work and each other while we are doing the work.”