TOP 5 DINING: IT'S WORTH A SHOT 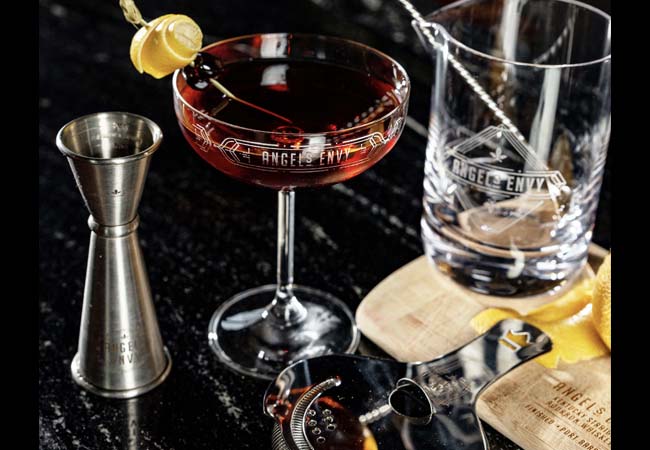 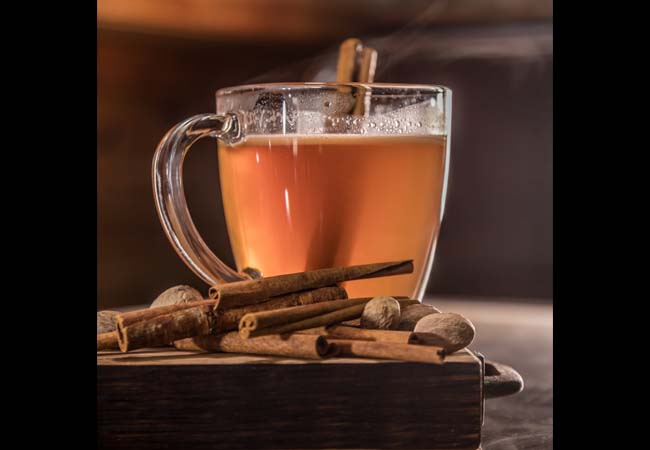 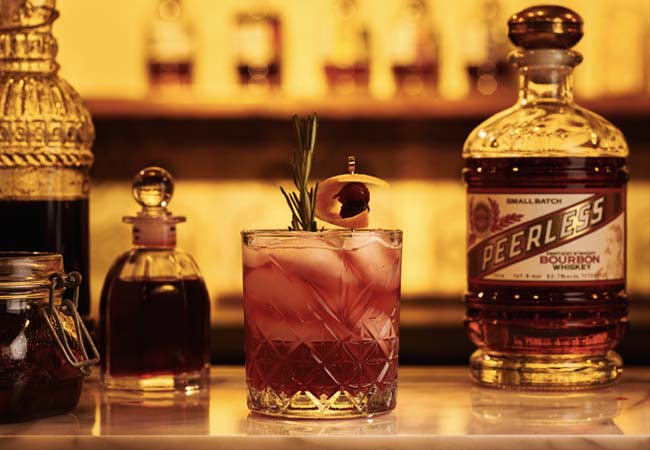 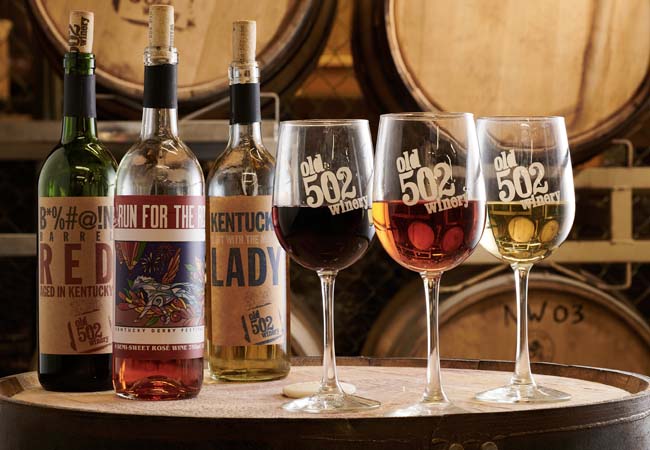 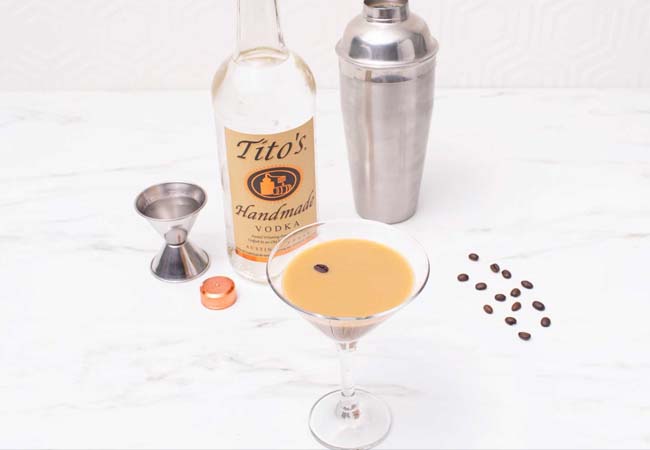 Congratulations, you survived 2020! Toast your resilience with a cocktail or glass of wine. We’ll help you stock your bar cart with five of the best brands around town and add some new recipes to your repertoire. Good riddance to the old year, and cheers to 2021! Let’s all drink to that.

After a distinguished career crafting iconic whiskey brands at the corporate level, Lincoln Henderson and his son Wes founded Angel’s Envy®. As Co-Founder and Chief Innovation Officer, Wes (@kybourbonmaker) lured his father out of retirement to build a family brand that is now one of the fastest-growing small-batch bourbon companies. Lincoln Henderson passed away in 2013, but his legacy lives on. “Our beautiful downtown distillery is the centerpiece of the bourbon trail and began the Whiskey Row renaissance,” says Wes. On December 14, 2020, Angel’s Envy® made history as the first Kentucky distillery to ship whiskey direct to consumer.

Book a tour at Angel’s Envy®, and you’ll likely have the pleasure of meeting Finishing Room Bar Manager Mike Bohn, @mikebohnmusic. A taste of Angel’s Envy® Caribbean Rum Finished Rye Whiskey in NYC’s West Village was all it took to convince Mike that Angel’s Envy was a brand with which he needed to be involved. Mike has been a bartender for over 20 years in NYC whiskey bars and fine dining, including Olmsted in Brooklyn, and has been with Angel’s Envy® for three years.

Wes and Mike look forward to getting operations back to normal and supporting their restaurant and bar partners. In addition to expanding the Angel’s Envy® brand home, the distillery visitors’ center has increased offerings and added e-commerce. “We accept nothing less than perfection,” Mike says. “We have pivoted and pivoted and pivoted to continue offering an unrivaled guest experience.” For more information, visit angelsenvy.com and follow @angelsenvy on Instagram.

The Giovanna - Full Bodied Manhattan Variation With A Hint Of Ginger

3. Garnish with lemon and cherry.

Four Roses® Bourbon moved to Whiskey Row in 1884 and received its trademark in 1888. The brand continued to sell through Prohibition for “medicinal purposes.” Seagrams acquired the company in the 1940s, and Four Roses® was sold as export only until Kirin Brewery Company, Ltd. purchased it in February 2002 and resumed sales in the United States. Four Roses® distinguishes itself from other bourbon brands by creating unique combinations of its ten distinct bourbon recipes.

Four Roses® Master Distiller Brent Elliott is originally from Owensboro, Kentucky, and received a chemistry degree from the University of Kentucky. He was living and working in Tennessee when he took what would become a life-changing trip to tour a bourbon distillery. Brent was hooked, and by 2005 he was employed by Four Roses®. “I was lucky to get involved with a great brand, and as Master Distiller, I am living my dream.” Who better to make some January recommendations from the extensive cocktail list at cocktails.fourrosesbourbon.com?

In November 2020, Four Roses® announced plans for a 14,446 square foot expansion to the visitor center. With completion expected in Fall 2021, the project will include a new state of the art bar, four new tasting rooms, an updated retail gift shop, and an outdoor patio space. Opened in December, Warehouse Y “is 45,043 square feet in size and can accommodate 24,288 barrels.” Follow @fourrosesbourbon and Facebook and Instagram for the latest info and future developments.

1. Stir all Hot Buttered Rum Mix ingredients until evenly mixed. Set aside. (Refrigerate if made in advance.)

2. Fill mug up to the top with hot water and allow to temper for ~45 seconds. 3. Dump hot water and refill to 2⁄3 with hot water.
4. Add a heaping dessert spoon of Hot Buttered Rum Mix and stir vigorously. 5. Add Four Roses® Bourbon and 1 dash of Angostura Bitters.

6. Top with more hot water if needed and give a quick stir.
7. Garnish with grated nutmeg or a tall cinnamon stick and serve with the spoon in.

Established in Henderson, Kentucky, The Worsham Distilling Company crafted the first Peerless Whiskey in the early 1880s. Henry Kraver acquired E. W. Worsham & Company in 1889 and set to work upgrading machinery and adding warehouses. In 1907, Henry incorporated Worsham Distilling Co. as The Kentucky Peerless Distilling Company. By 1917, the company was operating at peak production of 23,000 barrels per year with 63,000 stored. Kentucky Peerless whiskey was one of a few spirits available by prescription for medicinal use during Prohibition. Henry also successfully navigated the company through World War I and the Great Depression.

Single Barrel Curator John Wadell was born and raised in Louisville. His love for spirits led him to work as a bartender. “Kentucky Peerless gave me the tools to succeed, working closely with Master Distiller Caleb Kilburn.” John shared a few of his favorite Peerless cocktails: a classic Peerless Bourbon Sidecar, the rye whiskey Green Point with a dash of chocolate bitters in place of Angostura, and the fruity, rye Ward Eight with a splash of pineapple juice added. For more cocktail recipes and distillery tour information, visit kentuckypeerless.com. Follow @kentuckypeerless on Instagram and @KentuckyPeerlessDistilling on Facebook.

1. To make the Maple & Cranberry Simple Syrup, in a small saucepan, bring all ingredients to a simmer over medium-high heat until berries begin to burst, about 5 minutes. Strain and let cool. (Makes enough simple syrup for 10 cocktails.)

2. Add ingredients into a cocktail shaker with ice and shake until good and cold. Strain into rocks glass over ice and garnish with a rosemary sprig and 2-3 cranberries.

As Kentucky’s only urban winery, Old 502 Winery does not have its own vineyard but instead crafts eclectic blends from grapes sourced in the US and Chile. Winemaker Dustin Baumann joined Old 502 in October 2016 and worked under previous Winemaker Logan Leet before assuming the role in November 2017. Dustin studied economics and public policy at Indiana University and continues his education through enology and wine chemistry classes and UK College of Agriculture conferences. With twelve wines to choose from, Dustin guided us through Old 502 Winery’s bestsellers.

At the other end of the spectrum is the dessert wine After Choc with Cabernet Sauvignon, Merlot, and chocolate additives, reminiscent of a raspberry Tootsie Roll® Pop! Sweet wine lovers will also appreciate Old 502’s bestselling white “Kentucky Lady” from Kentucky-grown grapes, of course.

The sweet red Bach’s Wine is “music to your lips” made with 100% New York Concord grapes. In 2014, Old 502 partnered with the Kentucky Derby Festival to create the official festival wine Run for the Rosé from 100% California Grenache. Old 502’s only rosé has a “white pepper spice note.”

As Ben Franklin once wrote in a letter circa 1779, wine is “a constant proof that God loves us, and loves to see us happy.” Find Old 502 wines at Total Wine & More, Liquor Barn, Kroger, and many independent liquor stores. Visit old502.com and follow @Old502 on Facebook, Instagram, and Twitter.

Bert “Tito” Beveridge created Tito’s Hand- made Vodka, America’s Original Craft Vodka, in the mid-1990s in Austin, Texas, where the corn based vodka is still “batch distilled using old-fashioned pot stills.” Its consistency, smoothness, and affordability have built customer loyalty, as has their philanthropy program, “Love, Tito’s.” Through Love, Tito’s, the spirits brand has supported numerous causes, from natural disaster recovery to community enrichment programs and so much more. “Being able to use vodka as a means to give back to the local and national community is a dream come true” for Tito’s mixologist Christina Rhodes. “When it comes to mixing with Tito’s, the sky’s the limit! Whether you like infusions or cocktails on the rocks, Tito’s slightly sweet flavor and smooth texture offers a refined, yet adaptable base perfect for experimentation.“

Christina brings years of bar experience to her role at Tito’s, managing its cocktail program, and curating Tito’s signature infusion program. She made some seasonal suggestions that are just perfect for this wintry month. “All snowed in and stuck inside? Well, bundle up, throw a log on the fire, or turn up the thermostat and stir together the perfect cold-weather cocktail. Chocolate. Coffee. Tito’s. Toss in a few marshmallows

to top off your mug, and you’ve got the ultimate way to spend a snow day,” with Tito’s Snow Day Sipper. Another hot option is Tito’s Toddy: “When the temperatures drop, nothing beats curling up in front of the fire with a warm cup of tea. Add a splash of Tito’s, and you’ll really stay toasty this season.” Tito’s is sharing with us the full recipe for the Tito’s Espresso Martini, “Shake up a decadent after-dinner drink that adds a jolt of bold espresso and a little sweetness to your smooth Tito’s.”

1. Add all ingredients to a shaker with ice.

2. Shake and strain into a martini glass.

3. Garnish with espresso beans and enjoy!