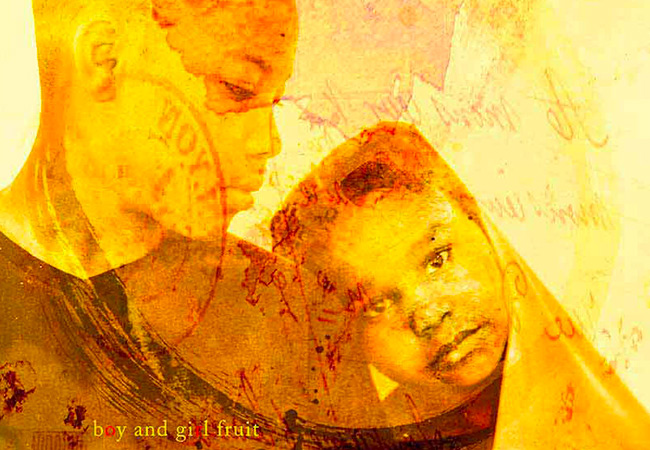 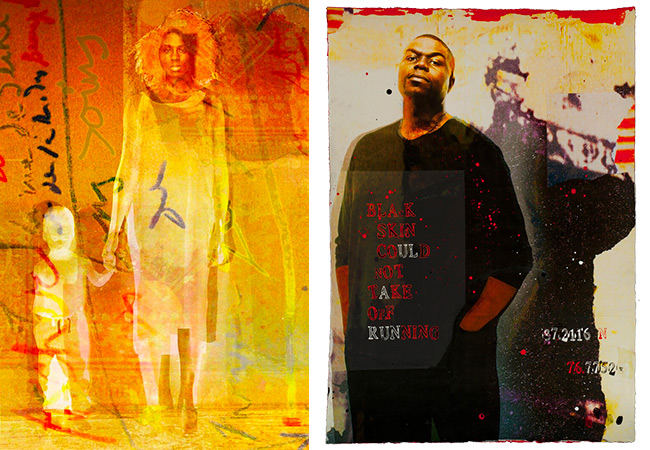 “I was here,” the Ancestor Spirit Portraits seem to whisper as they line the windows and filter light from within and without the Historic Lexington Courthouse. Images in tapestry form - paint, print, and photos, poems and prayers woven together, I Was Here travels beyond the old Cheapside square and former slave market, garnering multiple awards and recognitions along the way.

Initially conceived after the 2016 Presidential election, the project began with a vision - an African mother and child appearing and disappearing in the windows and doorways surrounding the Old Courthouse like spirits - seen from artist Marjorie Guyon’s Cheapside studio view. By October 2018, the renovated courthouse and surrounding shops, bars, and offices bore the images, and business owners began to tell their stories.

The words would also be seen and heard through “Auction Block of Negro Weather,” the poetry of former University of Kentucky Guy Davenport Endowed Professor of English Nikky Finney. Her father was a civil rights attorney and South Carolina Chief Justice. In 2011, Nikky’s “Head Off & Split” won the National Book Award for Poetry. Nikky, now John H. Bennett, Jr. Endowed Professor of Creative Writing and Southern Letters at the University of South Carolina, drew inspiration for the I Was Here project from Historical Marker #2122: Cheapside Slave Auction Block/Slavery in Fayette Co.

Photographer Patrick J. Mitchell photographed the contemporary African Americans that create the foundation of the Ancestor Spirit Portraits. I Was Here Project Manager Barry Darnell Burton wrote and dedicated the prayer “Where Do I Begin?” to mark the launch. Also incorporated in Marjorie Guyon’s translucent tapestry collages are latitudes and longitudes of historic transatlantic slave trade sites. The Cheapside Lexington sites were transformed not only by refurbishment and commercial use of the courthouse but by the removal of Confederate statues General John Hunt Morgan and Secretary of War John C. Breckinridge from Henry A. Tandy Centennial Park.

Convention and Visitors Bureaus may also have a role to play in projects seeking to heal divisions. “We kept thinking there has got to be a different way for us to have a conversation. I Was Here is something that serves as a national template and a cue that can be taken for any community to finish telling the rest of the story, and in a way that allows everyone to bring their humanity to the discussion,” VisitLex President Mary Quinn Ramer has said.

Early funding for I Was Here was provided by VisitLex, Kentucky Arts Council, The Greater Clark Foundation, Blue Grass Community Foundation, and Wells Fargo, allowing the project to expand into Lexington public libraries and the rural community of Winchester, Kentucky. As the project grows, so do the accolades. I Was Here is an American Association of State and Local History Award of Excellence recipient. “AASLH Leadership in History Awards is the most prestigious recognition for achievement in the preservation and interpretation of state and local history.”

According to artist Marjorie Guyon, “The historians guide us to significant locations. The Ancestor Spirit Portraits simultaneously create a visual history, a memorial, and a set of guardian figures. Through the lens of our broken past, we can create a vision for the future - a means to shift the spirit of the country to an understanding of our shared humanity. The project has led us from landmark to landmark, and to understand just how visionary some historians are.”

In June 2020, I Was Here received an Art Works award with a $20000 grant from the National Endowment for the Arts. The project recently gained international recognition through a CODAworx CODAawards win in the Public Spaces Budget category, and inclusion in Interior Design® Magazine and CODAawards “Top 100 most successful design projects that integrate commissioned art into an interior, architectural, or public space.” Marjorie believes bringing art to the general public is one of the most critical aspects, “The arts are traditionally seen as the purview of the wealthy. That is not what this project is about. There is a wound in the heart of America. We hope to bring healing in a very challenging time. It’s going to take all of us doing what we’re really good at. That’s why this is a spirit project with a big team. Each of the original pieces is thumb printed, not signed, and almost four years later, it remains a collaborative project.”

In summer 2021, I Was Here will be featured in a CODAawards winners exhibition in the Octagon Museum at the American Institute of Architects’ Headquarters in Washington DC. “Like slavery once was, the figures are everywhere. Each piece, like all good public history, pushes viewers to consider the past, present, and future all at once. The goal of commemorating a legacy of abuse, violence, and pain presents certain challenges. I Was Here meets these challenges in an eloquent, reverent, and respectful way,” Vanessa Holden, Professor of African American History at the University of Kentucky. In the coming months, I Was Here will launch a historic walking tour, which may eventually be replicated in other cities. In the meantime, Louisvillians can engage with the Lexington project, and through the website i-was-here.org, @IWASHERE on Facebook, @i_was_here_usa on Instagram, and “i was here” on LinkedIn.