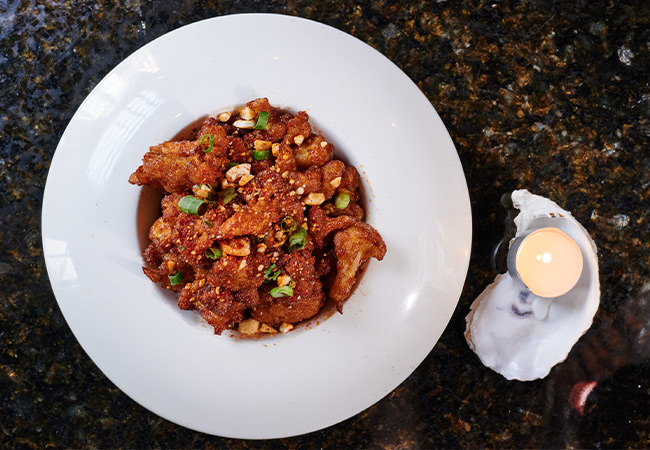 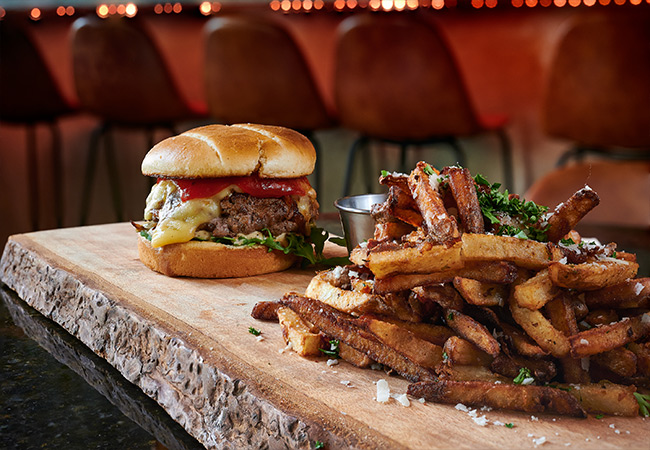 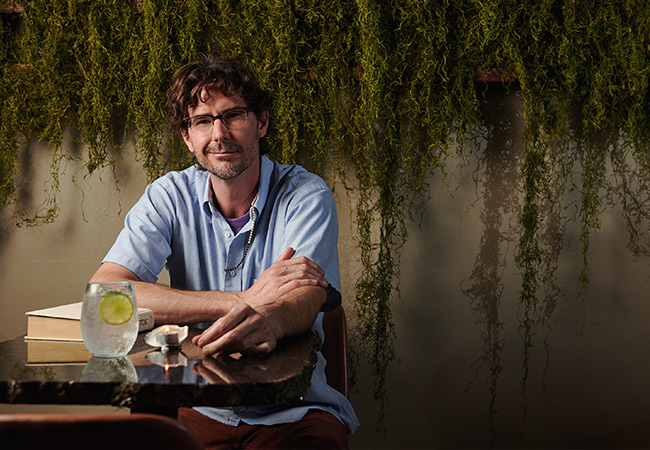 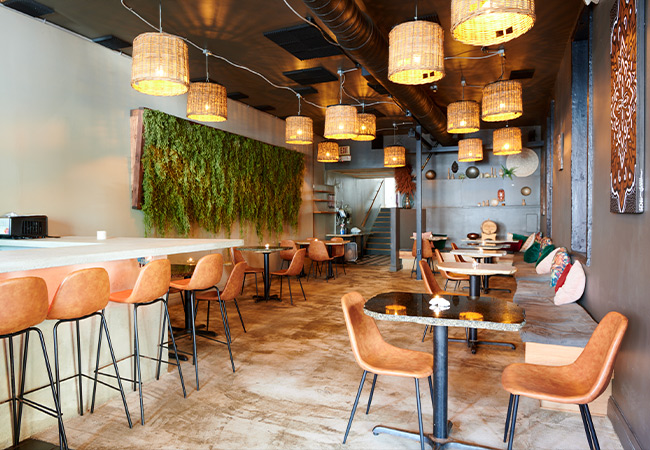 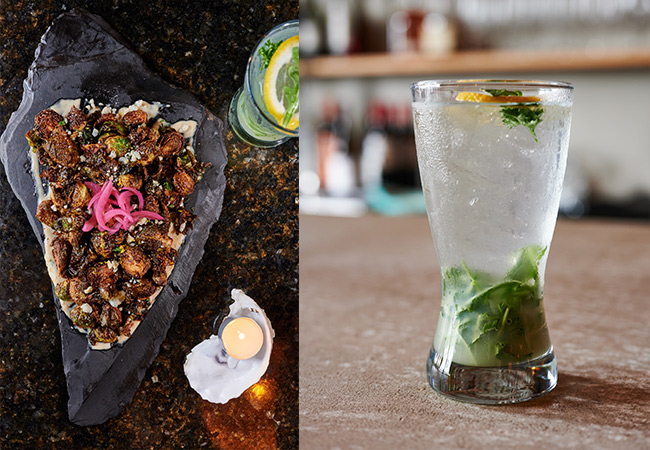 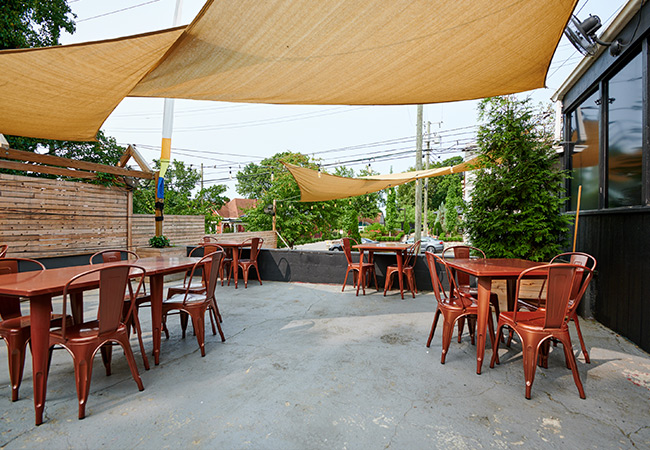 “We are open,” messaged Ostra owner Chris deRome, with an enthusiastically raised hand emoji, when we reached out to catch up with the restaurant and tell its story. Restaurant review and reservation sites were still listing Ostra as “permanently closed” even as Chris was bringing it back to life. Ostra originally opened in the summer of 2018 as a joint project between Louisville restaurateur Adam Burress, event planner Mike Brady, and Chris deRome, who had been Bar Manager at Seviche for twelve years.

“Don’t call it a comeback,” says Chris. “Call it hard work if you will.”

The “casually upscale” Clifton restaurant was initially conceived to introduce local diners to seafood tapas and sustainable food options, such as cricket dust, wild boar, and lionfish. “We wanted to open their minds to different kinds of meat and alternative proteins,” says Chris. While he still believes that model is the way forward, “sourcing locally to survive globally,” the sustainability of Ostra itself now depends on listening and reacting to what customers want, rather than dictating with the menu.

Ostra temporarily shut down on March 16 when Kentucky restaurants were ordered to close due to COVID-19. In May, the ownership team determined that Ostra would not survive without further significant investment and offered it for sale. By mid-June, Chris de Rome grew restless. “I ran out of room in my yard to garden, so I decided to see if I could open up the restaurant on my own.” Chris began his working life by installing windows for the family glass shop. He had a stint as an on-air deejay in Charlestown, SC, worked a radio switchboard in New York and ran a wine store there for five years. After a friend offered him an opportunity to open a wine store in Logan Street Market, Chris left his longtime position at Seviche with a good-natured April Fools’ Day ghosting of his own going-away party. (He did pop in later to say goodbye.) But before Chris could get the wine store up and running, the Ostra opportunity came knocking.

Chris had invested too much in Ostra financially and physically, putting in work on the build-out. He was determined to give it another go. The first weekend of reopening, Chris served only hummus, oysters, and fries. But he was so encouraged by the support of Louisvillians who were venturing out, masking up, and rallying around struggling restaurants. Chris’s wife Laura, a seamstress and entrepreneur, had told him that people love a comeback. “Don’t call it a comeback,” says Chris. “Call it hard work if you will.” On a given night, you will find Chris answering the phone, bartending, waiting on tables, and running food that he mostly sources himself. Laura’s Cannonball Swimwear studio is upstairs from Ostra. During the pandemic, she and Chris also made masks to support their own eating habits. “We are working hard together to keep local business alive while giving jobs to a few fantastic people.”

As of early September, Ostra was still the only restaurant open five days a week for in-person dining at Pope and Frankfort’s formerly festive corner. Ostra is bringing some life back to the area. Chris could not sustain it without Chefs Paris Black and Kyle Christie operating the kitchen. “I want local businesses to survive while also keeping a socially-distanced restaurant with large outdoor seating. We have a small but thoughtful menu that is growing slowly with the demand of our regulars.” As the restaurant’s website was still under revision, Chris shared with us their latest menu and a handful of Chef Black and Chef Christie’s most popular dishes.

The 16-oz Ribeye is a main attraction with duck stock risotto, oyster mushrooms, asparagus, and peppercorn cream. Their first concession to some customers’ preference for comforting classics was a cheeseburger. Made of 100% ribeye on a brioche bun, the Ostra Burger is topped with house-smoked Kerrygold white cheddar, caramelized onions, arugula, aioli, and house ketchup. The decadent Duck Grilled Cheese is made with brie, apple, honey, “love,” and “magic.”

Vegetarian options are also available at Ostra. Crispy Brussels are full of flavor with citrus miso tahini, blue cheese, and orange zest. Nearly every day, Chris keeps his energy up with an Ostra Bowl, similar to a Korean bibimbap: rice, farm-fresh veggies, and an egg cooked to order. They offer an added protein for $3 more. The refreshing Watermelon Salad is accented with goat cheese, honey, salt, and lime. Wei La (Mandarin Chinese for “a little bit spicy”) is a vegan delight of crispy cauliflower, spicy soy glaze, and hummus. Substitute with chicken for an added $2.

Ostra’s bar program is pretty much the same as when Chris first created it. Nickelodeon™ shows and characters inspired the names of most of the cocktails. Chris also pointed out the Old Fo Barrel Aged Manhattan, “People jump up and down for it. I have seen them leave the ground.” All of this is safely enjoyed in the appropriately-spaced dining room or outside under the trees. Chris has brought the arts back to the spacious patio with musicians such as The Hill Figs: “Bob Dylan meets Townes Van Zandt.” He also tried an outdoor movie night, until a storm chased it away. As a poetry lover himself, Chris also hopes to add poetry readings for more outdoor entertainment. For updates and specials, follow Ostra on Facebook @ostralou.