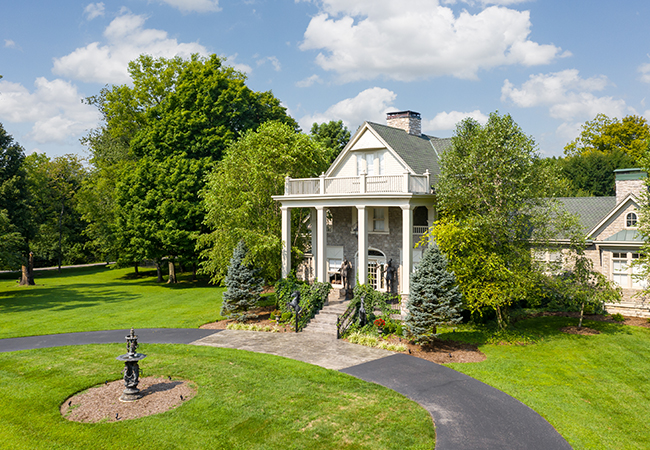 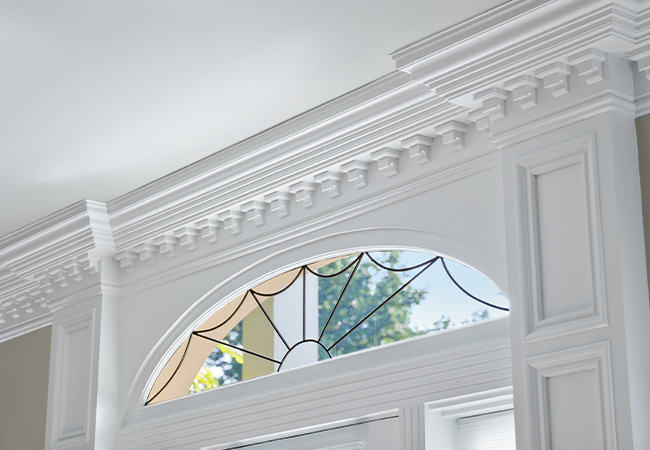 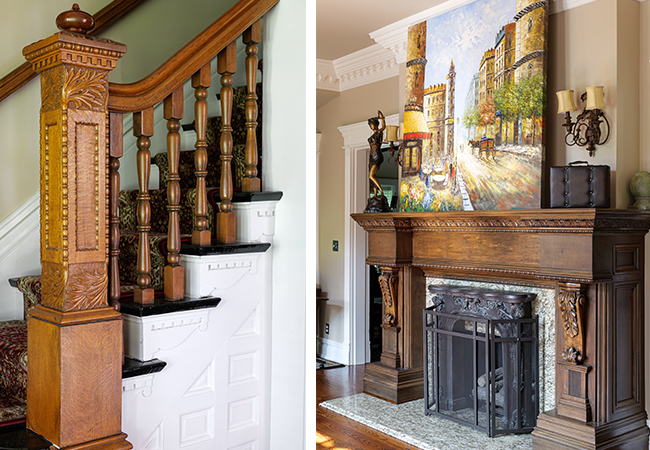 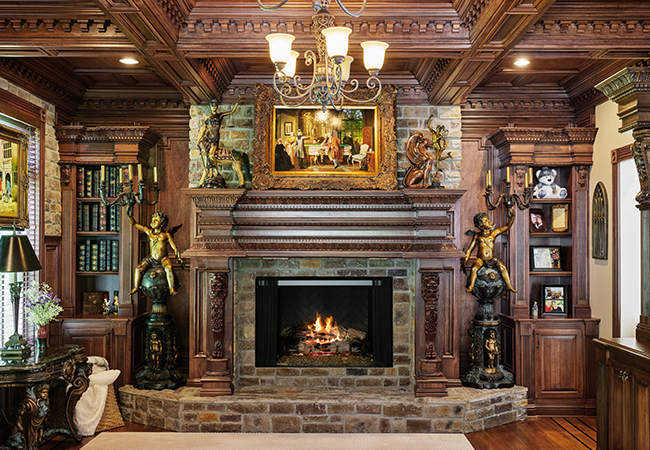 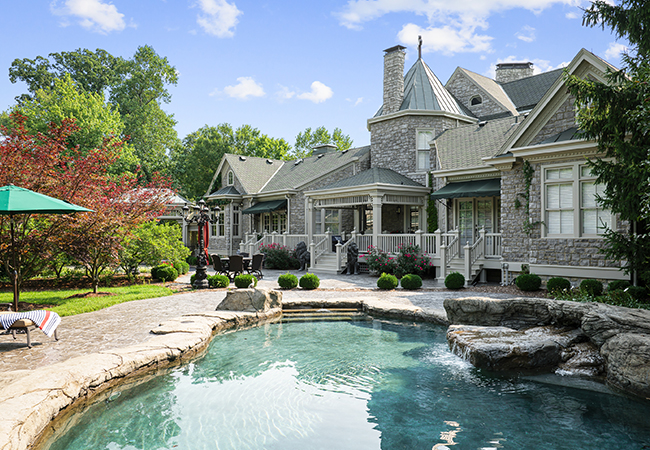 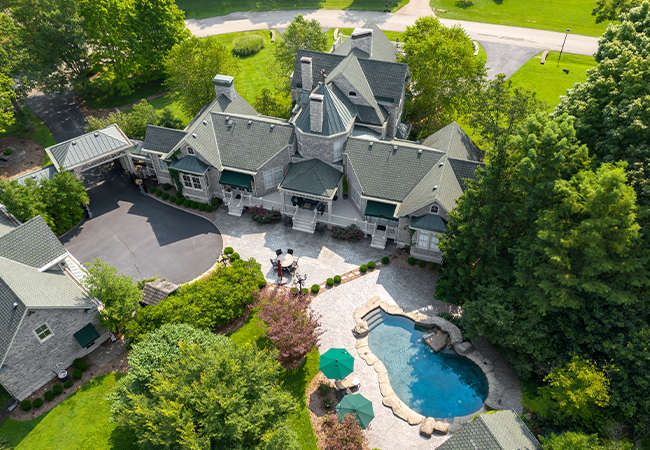 Most people enjoy seeing chateau-style homes overseas on a European vacation, but you don’t have to take a day-long trip to feel like you’ve stepped into an Old World garden. At the end of a long, wooded driveway, you’ll see a French-Victorian mansion, Wooldridge Place, and it’s fit for a foliage fanatic.

Contractor Michael Gordon, and his family, own the 7,862-square-foot, 6-bedroom, 7-bathroom house that’s been renovated to its pristine current state. From the elaborate Old World kitchen to the ornate crown molding and trim, this house has both the elegance of the 21st Century and the charm of the 19th Century.

Wooldridge Place was built in 1870, according to a historical write-up. The place originally held the address of LaGrange Road, but now is part of a residential neighborhood and sits on Wooldridge Place. Rapid industrial and urban expansion in the area led city residents to the countryside during the 1800s, including Orville Truman, a Louisville dry goods merchant, who built the Pewee Valley mansion.

The original two-and-one-half story house, built in the Queen Anne Victorian style, had a parlor, reception room, dining room and kitchen on the first floor, four bedrooms on the second floor and three small rooms on the next half story, according to the home’s history. It was sheathed in 5-inch painted poplar clapboard with decorative areas of cedar shakes and fish-scale shingles. An octagonal tower stood at the rear of the home and sleeping porches were built on each side of the second floor.

In 1923, the home was bought by Gregory Taylor and Ophelia W. Blackley who operated a school in the back room of the second floor until 1933. When the home was bought by heirs in 1941, it was considerably altered. The wrap-around Queen Anne porch was removed and a two-story Neoclassical porch with terrazzo floor and steps was constructed on the front of the house, according to its history, as well as a rathskeller which was built under the porch.

The home would eventually house the Bingham family, who owned and published The Louisville Courier-Journal and The Louisville Times. It was then owned by Donald and Karen Henson in 1994 who extensively remodeled the home. Sonny Whittle, an architectural artist, was employed to design and oversee this renovation. The porte-cochere, added after the original construction, was taken down. A one-story rear wing was designed to match the style, materials, and trim of the original home. The southeast section contained a master bedroom, bath, closets, vestibule, and half-bath; the northeast section had a large kitchen, great room and foyer.

The back porches, terrace, and a story-and-a-half carriage house, which held three vehicles and had a living space above it, were added in the 1994 renovation. It was adjoined to the house by a pergola and drive-through breezeway, according to the history.

The current owners, self-proclaimed old home lovers, purchased Wooldridge Place in 2011. Michael says his goal was to bring the home back to its original French Victorian style after decades of modern renovations. He stripped down the whole home creating dramatic, three-piece crown moldings throughout with 1,600 4-piece dental blocks.

Many of the floors were scraped and redone to create cognac, bourbon-colored finish. The cabinetry was made to be an Old World style with hand-carved woodwork. Countertops were replaced with granite and appliances were upgraded to all Viking fixtures. The family room was renovated to hold a dark library with all wood walls, a carved-woodwork fireplace with bookshelves on each side, and a coffered ceiling. In another room, MIchael reused a wooden mantle he found with a carved angel on a fireplace. He also used recovered stone in the breakfast room to continue the same style throughout the inside.

On the outside of the home, the front and rear porches were pulled off and rebuilt to stamped English stone. Chateau chimneys were replaced with aged copper to make the home look older. The roof now has specialty tile to look like slate to continue the look of the Victorian style. “(We wanted) everything to look old but redone,” Michael says. The carriage house remains with a full apartment and three-car garage.

Landscaping was a great feat for the contractor. The plan included a forever lagoon pool, which was totally concrete, molded, and hand-done to look mature. The pool house holds a restroom, kitchen and seating area with the look of an English cottage, complete with vines on the exterior. Vines cover the main house, too, which is magnificent in the autumn, says Michael. “We are truly amazed at the color and looks of everything throughout the seasons.” Also worth noting are beautiful Old World bronze statues, a double-tiered bronze angel fountain, hand-made bronze prancing horses flanking the entrance stairs, along with bronze knights guarding the entrance door.

The contractor took two ash trees that were poisoned a few years ago, cut them down to 14-feet and had an artist hand-carve a statue of a highly-detailed wizard and a winged dragon to guard the castle. “I was always fascinated with castles and chateaus,” Michael says. The exterior is guarded like a medieval home with gothic fencing. After nine years of an on and off continuation of a dramatic recreation of an Old World English Victorian chateau, Michael and his family believe, in their eyes, that this masterpiece is finished.