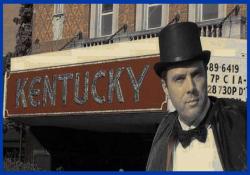 Join Louisville's own, Mr. Ghost Walker for a 90 minute, spirited tour of downtown Louisville's most famous addresses. Hear tales of ghost encounters, strange apparitions, murder and mayhem while on an easy walking tour of the city. Notable locations include the Brown and Seelbach Hotels, the Palace Theater, and other haunted destinations. The tour meets at the statue of Mr. Brown, on the 4th Street side of the Brown Hotel, 335 W Broadway on Friday nights at 7:30 Reservations suggested 502-689-5117